How to Identify Skew and Symmetry in a Statistical Histogram

Explore Book Buy On Amazon
Sometimes the mean versus median debate can get quite interesting (even beyond mathematician standards). Especially when you look at the skewness and symmetry of your statistical data in a histogram.

For example, suppose you’re part of an NBA team trying to negotiate salaries. If you represent the owners, you want to show how much everyone is making and how much money you’re spending, so you want to take into account those superstar players and report the average. But if you’re on the side of the players, you would want to report the median, because that’s more representative of what the players in the middle are making. Fifty percent of the players make a salary above the median, and 50 percent make a salary below the median.

To sort it all out, it’s best to find and compare both the mean and the median. A graph showing the shape of the data is a great place to start.

One of the graphs you can make to illustrate the shape of numerical data (how many values are close to/far from the mean, where the center is, how many outliers there might be) is a histogram.

A histogram is a graph that organizes and displays numerical data in picture form, showing groups of data and the number or percentage of the data that fall into each group. It gives you a nice snapshot of the data set. 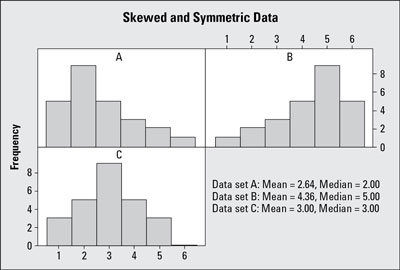 A) data skewed right; B) data skewed left; and C) symmetric data
Data sets can have many different possible shapes; here is a sampling of three shapes that are commonly discussed in introductory statistics courses:

Each histogram offers valuable insight into your skewed and symmetric data. In other words, you don't have to own an NBA team to find this useful!