How to Identify a Sampling Distribution

A distribution is a listing, graph, or function of all possible outcomes of a random variable (such as X) and how often each actual outcome (x), or set of outcomes, occurs. 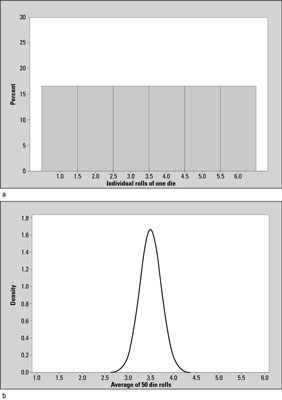 Comparing the standard normal (Z-) distribution to a generic t-distribution.

For example, suppose a million of your closest friends each roll a single die and record each actual outcome (x). A table or graph of all these possible outcomes (one through six) and how often they occurred represents the distribution of the random variable X. A graph of the distribution of X in this case is shown in example a in the above figure for Example (a). It shows the numbers 1–6 appearing with equal frequency (each one occurring 1/6 of the time), which is what you expect over many rolls if the die is fair.

Now suppose each of your friends rolls this single die 50 times (n = 50) and records the average value of those 50 rolls,

Example (b) in the above figure shows the sampling distribution of

Example (b) (average of 50 rolls) shows the same range (1 through 6) of outcomes as Example (a) (individual rolls), but Example (b) has more possible outcomes. You could get an average of 3.3 or 2.8 or 3.9 for 50 rolls, for example, whereas someone rolling a single die can only get whole numbers from 1 to 6.

Also, the shape of the graphs are different; example a shows a flat, uniform shape, where each outcome is equally likely, and Example (b) has a mound shape; that is, outcomes near the center (3.5) occur with high frequency and outcomes near the edges (1 and 6) occur with extremely low frequency. This is to be expected. If you were to roll a die 50 times, you would expect the average to be near the average of the values 1,2,3,4,5,6 since each of those values are equally likely to occur. The average of 1,2,3,4,5,6 is 3.5.