you see the population standard deviation,

is in the numerator. That means as the population standard deviation increases, the standard error of the sample means also increases. Mathematically this makes sense; how about statistically? 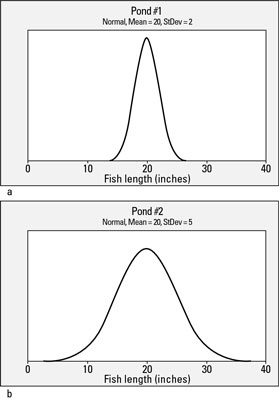 Suppose you have two ponds full of fish (call them pond #1 and pond #2), and you’re interested in the length of the fish in each pond. Assume the fish lengths in each pond have a normal distribution. You’ve been told that the fish lengths in pond #1 have a mean of 20 inches and a standard deviation of 2 inches (see Figure (a), above). Suppose the fish in pond #2 also average 20 inches but have a larger standard deviation of 5 inches (see Figure (b)).