What Role Does Tessellation Play in Basic Maths?

Explore Book Buy On Amazon
Tessellation is a fancy word for fitting shapes together so that there are no gaps between the shapes and none of the shapes overlap – as if you’re solving a jigsaw puzzle, tiling a wall or paving a path. It may seem like there’s not very much maths involved in tessellation, but in fact it’s all about the angles.

For example, the idea of Tetris is to manoeuvre different-shaped blocks falling from above into a rectangular space – any time you complete a line all the way across without any gaps, the line disappears and the blocks above it shift down.

Tetris is all about tessellation: fitting shapes together so there aren’t any gaps. Some other places you see tessellation are in the work of Dutch artist M.C. Escher and in a great deal of Islamic art – for instance at the Alhambra Palace in Spain.

You don’t need to think of tessellation in quite the same depth as these artists – although it can be fun to do so. For the numeracy curriculum, you only need to worry about fairly regular shapes. By the way, tessellation is part of the syllabus, but setting multiple-choice questions on tessellation is very hard, so it doesn’t often come up in the exam.

Tessellation has one important rule: wherever lines meet, the angles have to add up to 360 degrees. 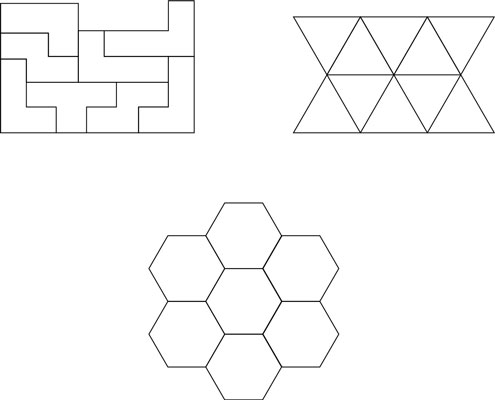 The only kind of multiple-choice question that would involve tessellation involves ‘filling in the gap’ – the examiner gives you two or three shapes that meet at a corner and you need to find the angle on the remaining shape.

This is a pretty simple process if you remember the important rule that I mention above: wherever lines meet, the angles have to add up to 360 degrees.