Explore Book Buy On Amazon
When math folks talk about using a graph, they’re usually referring to a Cartesian graph (also called the Cartesian coordinate system). The below figure shows an example of a Cartesian graph. 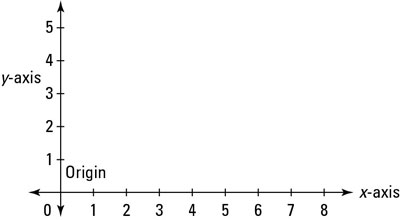 Plotting a point (finding and marking its location) on a graph isn’t much harder than finding a point on a number line, because a graph is just two number lines put together.

Every point on a Cartesian graph is represented by two numbers in parentheses, separated by a comma, called a set of coordinates. To plot any point, start at the origin, where the two axes cross. The first number tells you how far to go to the right (if positive) or left (if negative) along the horizontal axis. The second number tells you how far to go up (if positive) or down (if negative) along the vertical axis.

For example, here are the coordinates of four points called A, B, C, and D: