There are four addition theorems: two for segments and two for angles. They are used frequently in proofs.

After you’re comfortable with proofs and know your theorems well, you can abbreviate these theorems as segment addition or angle addition or simply addition; however, when you’re starting out, writing the theorems out in full is a good idea.

The above figure shows you how these two theorems work.

Note: In proofs, you won’t be given segment lengths and angle measures like the ones in the above figure. They are added to the figure so you can more easily see what’s going on.

As you come across different theorems, look carefully at any figures that accompany them. The figures show the logic of the theorems in a visual way that can help you remember the wording of the theorems. Try quizzing yourself by reading a theorem and seeing whether you can draw the figure or by looking at a figure and trying to state the theorem.

Check out the above figure, which illustrates these theorems.

Now for a proof that uses segment addition:

You will find what amounts to a game plan for this proof inside the following solution, between the numbered lines.

Reason for statement 2: Given.

You probably know what comes next: Statement 3 has to use one or both of the givens. To see how you can use the four segments from the givens, make up arbitrary lengths for the segments:

This is the three-segment version of segment addition, and that’s a wrap.

Before looking at the next example, check out these two tips — they’re huge! They can often make a tricky problem much easier and get you unstuck when you’re stuck:

The following proof shows how you use angle addition: 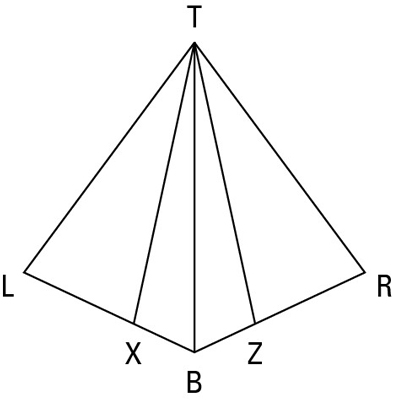 This proof includes a partial game plan that deals with the part of the proof where people might get stuck. The only ideas missing from this game plan are the things (which you see in lines 2 and 4) that follow immediately from the two givens.

Reason for statement 1: Given. (Why would they tell you this? See statement 2.)

Reason for statement 2: If an angle is bisected, then it’s divided into two congruent angles (definition of bisect).

Reason for statement 3: Given. (And why would they tell you that?)

Reason for statement 4: If an angle is trisected, then it’s divided into three congruent angles (definition of trisect).

Say you’re stuck here. Try jumping to the end of the proof and working backward. You know that the final statement must be the prove conclusion,

Now ask yourself what you’d need to know in order to draw that final conclusion. To conclude that a ray bisects an angle, you need to know that the ray cuts the angle into two equal angles. So the second-to-last statement must be

And how do you deduce that? Well, with angle addition. The congruent angles from statements 2 and 4 add up to

Reason for statement 6: If a ray divides an angle into two congruent angles, then it bisects the angle (definition of bisect).