The following figure shows an example. 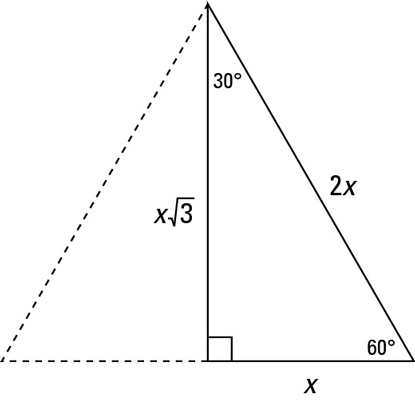 Get acquainted with this triangle by doing a couple of problems. Find the lengths of the unknown sides in triangle UMP and triangle IRE in the following figure.

You can solve 30°- 60°- 90° triangles with the textbook method or the street-smart method.

The textbook method begins with the ratio of the sides from the first figure:

Plug in the value of x, and you’re done:

Using that fact, do the following:

Try out the street-smart method with the triangles in the second figure. The hypotenuse in triangle UMP is 10, so first you cut that in half to get the length of the short leg, which is thus 5.

The 30°- 60°- 90° triangles almost always have one or two sides whose lengths contain a square root. In either case, the long leg is the odd one out. All three sides could contain square roots, but it’s impossible that none of the sides would — which leads to the following warning.