How to Identify Arcs, Central Angles, and Lengths of Arcs

Explore Book Buy On Amazon
A circle's central angles and the arcs that they cut out are part of many circle proofs. They also come up in many area problems. The following figure shows how an angle and an arc are interrelated.

A 60-degree central angle cuts out a 60-degree arc.

The measure of an arc is the same as the degree measure of the central angle that intercepts it.

Determining the length of an arc

An arc’s length means the same commonsense thing length always means — you know, like the length of a piece of string (with an arc, of course, it’d be a curved piece of string). Make sure you don’t mix up arc length with the measure of an arc which is the degree size of its central angle. 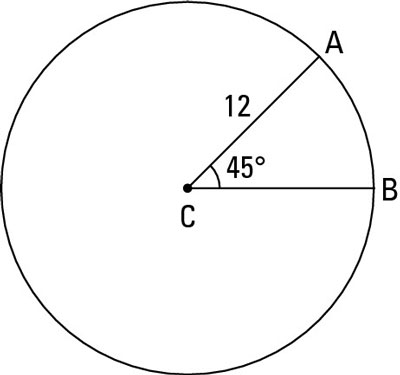 Its degree measure is 45° and the radius of the circle is 12, so here’s the math for its length: