How to Use the Angle-Bisector Theorem

The Angle-Bisector theorem states that if a ray bisects an angle of a triangle, then it divides the opposite side into segments that are proportional to the other two sides. The following figure illustrates this.

Don’t forget the Angle-Bisector Theorem. (For some reason, students often do forget this theorem.) So whenever you see a triangle with one of its angles bisected, consider using the theorem.

How about an angle-bisector problem? Why? Oh, just BCUZ. 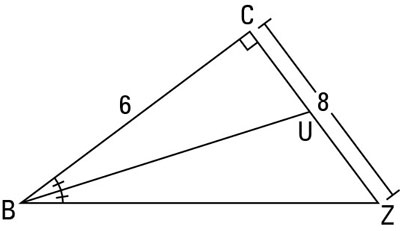 Note that the ratio of the areas of these triangles, 9 : 15 (which reduces to 3 : 5), is equal to the ratio of the triangles’ bases, 3 : 5. This equality holds whenever a triangle is divided into two triangles with a segment from one of its vertices to the opposite side (whether or not this segment cuts the vertex angle exactly in half).