How to Measure Angles

Measuring angles is pretty simple: the size of an angle is based on how wide the angle is open. Here are some points and mental pictures that will help you to understand how angle measurement works.

Degree: The basic unit of measure for angles is the degree.

A good way to start thinking about the size and degree-measure of angles is by picturing an entire pizza — that’s 360° of pizza. Cut the pizza into 360 slices, and the angle each slice makes is 1°. For other angle measures, see the following list and figure: 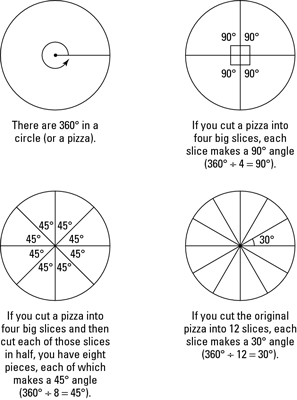 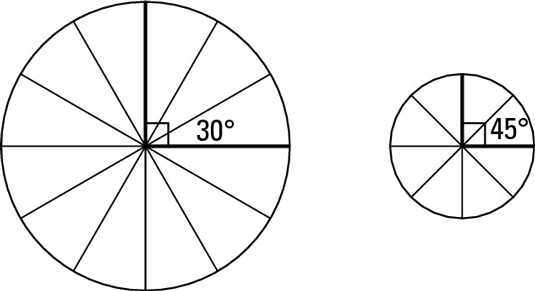 The fraction of the pizza or circle is the only thing that matters when it comes to angle size. The length along the crust and the area of the pizza slice tell you nothing about the size of an angle. In other words, 1/6 of a 10-inch pizza represents the same angle as 1/6 of a 16-inch pizza, and 1/8 of a small pizza has a larger angle (45°) than 1/12 of a big pizza (30°) — even if the 30° slice is the one you’d want if you were hungry. You can see this in the above figure.

Another way of looking at angle size is to think about opening a door or a pair of scissors or, say, an alligator’s mouth. The wider the mouth is open, the bigger the angle. As the following figure shows, a baby alligator with its mouth opened wide makes a bigger angle than an adult alligator with its mouth opened less wide, even if there’s a bigger gap at the front of the adult alligator’s mouth. 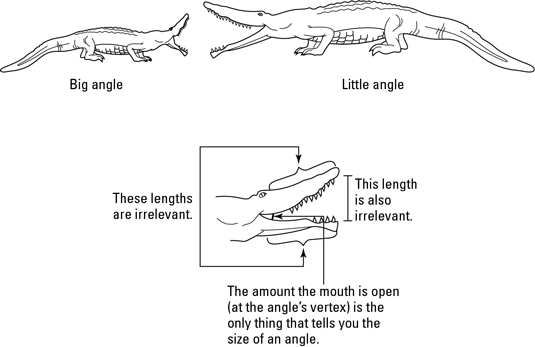