How to Find the Number of Diagonals in a Polygon

To find the number of diagonals in a polygon with n sides, use the following formula:

This formula looks like it came outta nowhere, doesn’t it? Of course, no math formulas come out of nowhere, but you might have to think about this one a bit to discover the logic behind it. (Just memorizing it is okay, but what’s the fun in that?)

Here’s a problem for you: If a polygon has 90 diagonals, how many sides does it have?

You know what the formula for the number of diagonals in a polygon is, and you know that the polygon has 90 diagonals, so plug 90 in for the answer and solve for n:

Here’s a nifty real-world application of the diagonal formula. Say there’s a small tennis tournament with six people in which everyone has to play everyone else. How many total matches will there be? The following figure shows the six tennis players with segments connecting each pair of players. 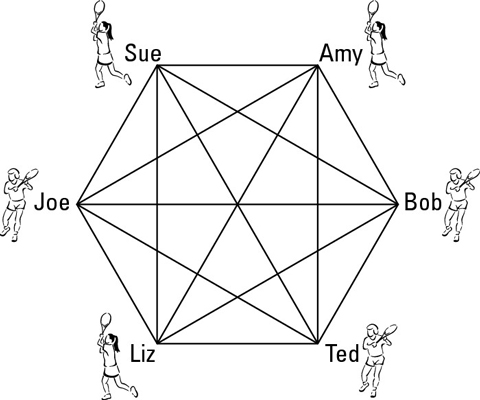 Each segment represents a match between two contestants. So to get the total number of matches, you just have to count up all the segments in the figure: the number of sides of the hexagon (6) plus the number of diagonals in the hexagon

The total is therefore 15 matches. For the general case, the total number of matches in a round-robin tournament with n players would be