How to Calculate the Area of a Regular Polygon

A regular polygon is equilateral (it has equal sides) and equiangular (it has equal angles). To find the area of a regular polygon, you use an apothem — a segment that joins the polygon’s center to the midpoint of any side and that is perpendicular to that side (segment HM in the following figure is an apothem). 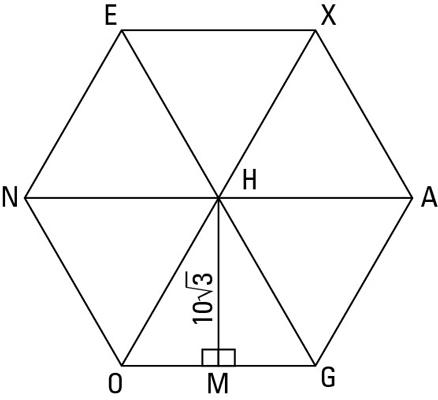 You use the following formula to find the area of a regular polygon:

So what’s the area of the hexagon shown above?

You need the perimeter, and to get that you need to use the fact that triangle OMH is a triangle (you deduce that by noticing that angle OHG makes up a sixth of the way around point H and is thus a sixth of 360 degrees, or 60 degrees; and then that angle OHM is half of that, or 30 degrees).

In a triangle, the long leg is times as long as the short leg, so that gives a length of 10. is twice that, or 20, and thus the perimeter is six times that or 120. Now just plug everything into the area formula:

Area of an equilateral triangle: Here’s the formula.