How to Use Tangent Substitution to Integrate

With the trigonometric substitution method, you can do integrals containing radicals of the following forms:

where a is a constant and u is an expression containing x.

You’re going to love this technique … about as much as sticking a hot poker in your eye.

Before you look at how trigonometric substitution works, here are some mnemonic tricks to help you keep this method straight. Remember, with mnemonic devices, silly (and vulgar) works. First, this involves three trig functions, tangent, sine, and secant. Their initial letters, t, s, and s, are the same letters as the initial letters of the name of this technique, trigonometric substitution. Pretty nice, eh? 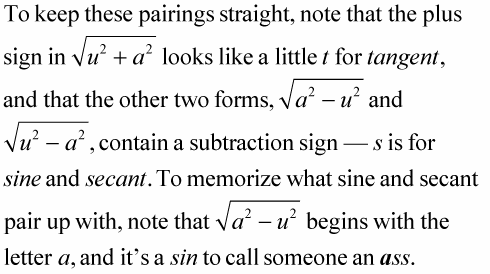 Okay, this is admittedly pretty weak. If you can come up with a better mnemonic, use it!

Now, ready to do some problems?