The study of trigonometry begins with the right triangle. The three main trig functions (sine, cosine, and tangent) and their reciprocals (cosecant, secant, and cotangent) all tell you something about the lengths of the sides of a right triangle that contains a given acute angle — like angle x in the figure below. 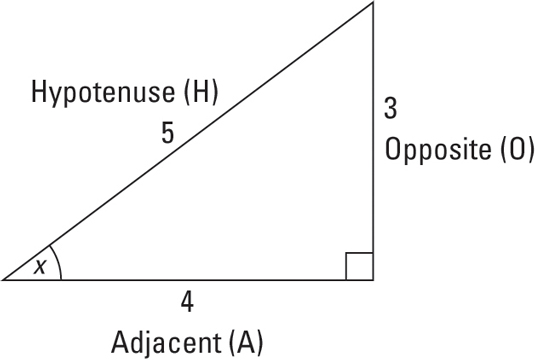 SohCahToa is a meaningless mnemonic that helps you remember the definitions of the sine, cosine, and tangent functions. SohCahToa uses the initial letters of sine, cosine, and tangent, and the initial letters of hypotenuse, opposite, and adjacent, to help you remember the following definitions. (To remember how to spell SohCahToa, note its pronunciation and the fact that it contains three groups of three letters each.)

For the triangle in the preceding figure:

For the triangle in the preceding figure: