How to Find the Derivative of a Line

The derivative is just a fancy calculus term for a simple idea that you probably know from algebra — slope. Slope is the fancy algebra term for steepness. And steepness is the fancy word for . . . No! Steepness is the ordinary word you’ve known since you were a kid, as in, “Hey, this road sure is steep.” Everything you study in differential calculus all relates back to the simple idea of steepness.

Here’s a little vocabulary for you: differential calculus is the branch of calculus concerning finding derivatives; and the process of finding derivatives is called differentiation. Notice that the first and third terms are similar but don’t look like the term derivative. The link between derivative and the other two words is based on the formal definition of the derivative, which is based on the difference quotient. Now you can go and impress your friends with this little etymological nugget.

Don’t be among the legions of people who mix up the slopes of horizontal and vertical lines. How steep is a flat, horizontal road? Not steep at all, of course. Zero steepness. So, a horizontal line has a slope of zero. What’s it like to drive up a vertical road? You can’t do it. And you can’t get the slope of a vertical line — it doesn’t exist, or, as mathematicians say, it’s undefined. 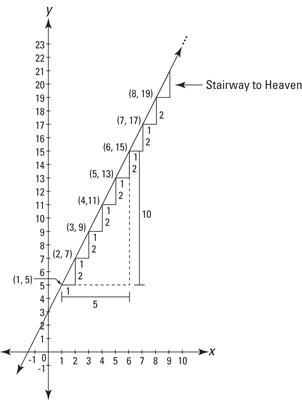 You should remember that

Next, you divide to get the slope: 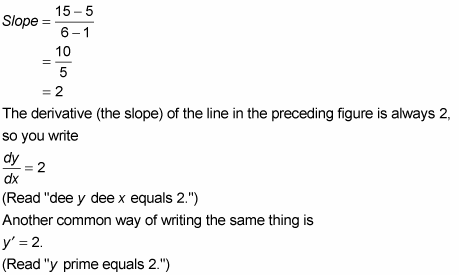