How to Approximate Area with Simpson's Rule

In contrast to the way intervals are used in the left-, right- and midpoint-rectangle rules and in the trapezoid rule, you need two intervals (instead of one) for each “trapezoid” in Simpson's rule.

Because of this, the total span must always be divided into an even number of intervals. 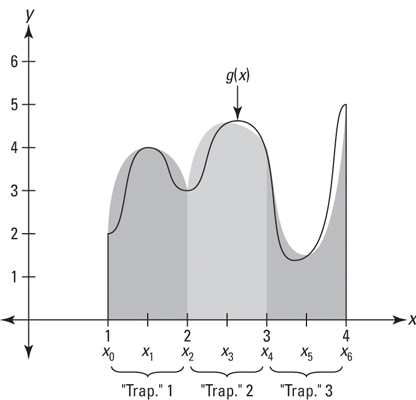 Simpson’s rule is a very accurate approximation method. In fact, it gives the exact area for any polynomial function of degree three or less. In general, Simpson’s rule gives a much better estimate than either the midpoint rule or the trapezoid rule.

Thus, the above formula always involves the same number of rectangles, trapezoids, and Simpson rule “trapezoids.”

If you don’t have the midpoint and trapezoid sums for the above shortcut, you can use the following formula for Simpson’s rule.