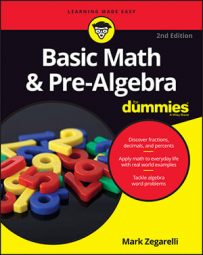 Explore Book Buy On Amazon
Math itself is one big concept, and it's chock full of so many smaller mathematical concepts that no one person can possibly understand them all — even with a good dose of studying. Yet certain concepts are so important that they make the Math Hall of Fame:

A set is a collection of objects. The objects, called elements of the set, can be tangible (shoes, bobcats, people, jellybeans, and so forth) or intangible (fictional characters, ideas, numbers, and the like). Sets are such a simple and flexible way of organizing the world that you can define all of math in terms of them.

Mathematicians first define sets very carefully to avoid weird problems — for example, a set can include another set, but it can't include itself. After the whole concept of a set is well-defined, sets are used to define numbers and operations, such as addition and subtraction, which is the starting point for the math you already know and love.

Zero may look like a big nothing, but it's actually one of the greatest inventions of all time. Like all inventions, it didn't exist until someone thought of it. (The Greeks and Romans, who knew so much about math and logic, knew nothing about zero.)

The concept of zero as a number arose independently in several different places. In South America, the number system that the Mayans used included a symbol for zero. And the Hindu-Arabic system used throughout most of the world today developed from an earlier Arabic system that used zero as a placeholder. In fact, zero isn't really nothing — it's simply a way to express nothing mathematically. And that's really something.

Have a big piece of pi

Pi (π): The symbol π (pronounced pie) is a Greek letter that stands for the ratio of the circumference of a circle to its diameter. Here's the approximate value of π:

Although π is just a number — or, in algebraic terms, a constant — it's important for several reasons:

Geometry just wouldn't be the same without it. Circles are one of the most basic shapes in geometry, and you need π to measure the area and the circumference of a circle.

Pi is everywhere in math. It shows up constantly (no pun intended) where you least expect it. One example is trigonometry, the study of triangles. Triangles obviously aren't circles, but trig uses circles to measure the size of angles, and you can't swing a compass without hitting π.

The humble equals sign (=) is so common in math that it goes virtually unnoticed. But it represents the concept of equality — when one thing is mathematically the same as another — which is one of the most important math concepts ever created. A mathematical statement with an equals sign is an equation. The equals sign links two mathematical expressions that have the same value and provides a powerful way to connect expressions.

Bringing algebra and geometry together

Before the xy-graph (also called the Cartesian coordinate system) was invented, algebra and geometry were studied for centuries as two separate and unrelated areas of math. Algebra was exclusively the study of equations, and geometry was solely the study of figures on the plane or in space.

The graph, invented by French philosopher and mathematician René Descartes, brought algebra and geometry together, enabling you to draw solutions to equations that include the variables x and y as points, lines, circles, and other geometric shapes on a graph.

The function: a mathematical machine

A function is a mathematical machine that takes in one number (called the input) and gives back exactly one other number (called the output). It's kind of like a blender because what you get out of it depends on what you put into it. Suppose you invent a function called PlusOne that adds 1 to any number. So when you input the number 2, the number that gets outputted is 3:

Similarly, when you input the number 100, the number that gets outputted is 101:

The very word infinity commands great power. So does the symbol for infinity (∞). Infinity is the very quality of endlessness. And yet mathematicians have tamed infinity to a great extent. In his invention of calculus, Sir Isaac Newton introduced the concept of a limit, which allows you to calculate what happens to numbers as they get very large and approach infinity.

Putting it all on the line

This pattern continues forever, with each value being halved, which means you can never get to the other side of the room. Obviously, in the real world, you can and do walk across rooms all the time. But from the standpoint of math, Zeno's Paradox and other similar paradoxes remained unanswered for about 2,000 years.

The basic problem was this one: All the fractions listed in the preceding sequence are between 0 and 1 on the number line. And there are an infinite number of them. But how can you have an infinite number of numbers in a finite space? Mathematicians of the 19th century — Augustin Cauchy, Richard Dedekind, Karl Weierstrass, and Georg Cantor foremost among them — solved this paradox. The result was real analysis, the advanced mathematics of the real number line.

Numbers for your imagination

The imaginary numbers (numbers that include the value i = √ - 1) are a set of numbers not found on the real number line. If that idea sounds unbelievable — where else would they be? — don't worry: For thousands of years, mathematicians didn't believe in them, either. But real-world applications in electronics, particle physics, and many other areas of science have turned skeptics into believers.

So, if your summer plans include wiring your secret underground lab or building a flux capacitor for your time machine — or maybe just studying to get a degree in electrical engineering — you'll find that imaginary numbers are too useful to be ignored.