Important Rights Listed in the Constitution

By: Glenn Smith and Patricia Fusco and
Updated: 03-26-2016
From The Book: Constitutional Law For Dummies 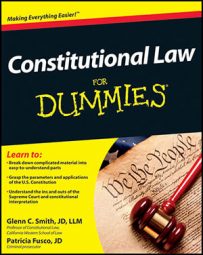 The Constitution is chock-full of guarantees of individual rights and rules about what the government can and can’t do. Some provisions affect people’s lives more than others, but they are all important in their own right. Here are just some of the important, often-discussed provisions and where you can find them in the Constitution:

Glenn C. Smith is a professor of constitutional law at California Western School of Law in San Diego, CA, and creator of a nationally recognized seminar in which law students learn about the Supreme Court by role-playing as current justices and lawyers arguing before them.

Patricia Fusco is a government attorney and a criminal prosecutor working in the California Attorney General's Office, Special Crimes Unit. As a trial attorney, she deals with issues of constitutional law on a daily basis.