Improve the Odds of Getting Your Fiction Story Published

By: Sarah Parsons Zackheim and Adrian Zackheim and
Updated: 03-26-2016
From The Book: Getting Your Book Published For Dummies

Getting Your Book Published For Dummies 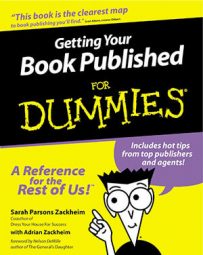 Getting your work of fiction published is different from getting nonfiction published. A fiction submission (short story or novel) must be a complete manuscript when you submit it to a publisher. Create a query letter, along with plot synopsis, to submit with your manuscript.

According to Marjorie Braman, a top fiction editor at HarperCollins, "We very rarely consider novels, especially first novels, unless there is a completed manuscript. And frankly, we almost never consider novels that aren't submitted by a trusted agent. There just isn't enough manpower to screen all of the unsolicited fiction manuscripts that come in every day."

It's much harder to sell a work of fiction because most major publishing houses are reluctant to take a risk — investing time they don't have and money they may not earn back — on an unknown writer. A look at the number of fiction versus nonfiction books published each year is proof enough — approximately 50,000 new nonfiction titles compared to only about 10,000 new fiction titles.

There's no question that the odds against a first novelist are tough — but not at all impossible. Your sales material is first and foremost your manuscript, which you've lavished a great deal of hard work on. So, when you're ready to submit your manuscript to editors and/or agents, craft a brief but compelling cover letter to send along with the first half of your novel. Provide just enough information in this letter to pique the reader's interest and entice them to read on. For example, "I'm enclosing the first half of my novel entitled, Future Habit. The story centers on a road trip that takes two unlikely protagonists — a convict on the run and a nun — to a future neither expected." Or, "A father/son drama that turns the Abraham/Isaac story on its head." A great title also helps get your reader's attention.

When selling fiction, it's best to submit the entire manuscript — but only when invited. If you are determined to submit a novel, unsolicited, to a publisher, target a few editors, and use a query letter to get in the door. The same submission approach applies with literary agents that you are looking to have represent your novel. An agent won't agree to represent you until she has read a complete manuscript. However, she may ask for a synopsis and sample chapter first to determine whether she's interested in reading the entire manuscript.

Your plot synopsis is a brief narrative summary — no more than a page or two — of your novel written in the present tense. The purpose of a plot synopsis is to hook an agent's interest enough for them to ask to see the manuscript. Make it as easy and enticing to read as possible.

Make sure that it tells the entire story — don't, for example, leave out the story's ending as a gimmick to get the editor to ask for more. You want to get the story essentials across, not the descriptive details or the exact dialogue, so write as clearly and tightly as possible. And create the synopsis as a whole, unified piece. Don't break it up with chapter headings.

To create your synopsis, start with a few sentences containing an action-filled summary of the novel. Introduce the main character and the conflict responsible for moving the story forward. As an example, here's a plot synopsis — of the sort that would be suitable for submission — based on the best-selling novel, The Pilot's Wife, by Anita Shreve:

Kathryn Lyons is awoken at 3 a.m. by news that the plane of her pilot husband, Jack, with 103 passengers aboard, has exploded off the coast of Ireland. When air crash investigators indicate that they suspect a bomb and Jack is somehow implicated, Kathryn is presented with startling new information about her husband and wonders if she really knows the man she had been happily married to for 16 years.

Then tell how the character plans to resolve this conflict. Also, supply some of the story's essential details up front: Main character's age, occupation, marital status; story setting (place), and time (past, present, future):

The Lyons family — Kathryn, a 38-year-old schoolteacher; Jack, a 48-year-old commercial airplane pilot; and Mattie, their 15-year-old daughter — love the ease and simplicity of their life in rural Vermont. Especially since the unusual schedule of Jack's job as a commercial airline pilot with an international route keeps them apart for the better part of each week.

But when Jack's plane explodes and a media frenzy breaks out accusing Jack of responsibility for the bombing, Kathryn, so sure of his innocence, sets out to defend Jack's honor. That was her first mistake. Her second was dialing a phone number she discovers among her husband's papers.

Now, you're ready to tell your story, focusing on what happens. Reread your novel, and as you finish each chapter, summarize the most important events that occur. Remember to focus on what happens in the novel including the character motivation and emotion that propels action and lends a human touch to the storyline.

Imagine that you're telling your story to a group of friends. You won't have their attention for five hours, but you will for a few minutes. So convey the essential storyline complete with tension, pacing and character emotion.

Make your synopsis complete and yet a quick read that stands on its own. The most effective synopsis provides the feeling of having read the entire book.

Of course, it's impossible to tell from a single chapter or even the first few chapters whether an unknown writer can orchestrate the important elements of fiction — character, plot, dialogue, pacing, setting, and point of view. For this reason, editors find that fiction submissions of a plot synopsis or sample chapters aren't enough to demonstrate that the writer can carry through on what they promise. That's why it's important to write and rewrite your entire novel before submitting it for publication.

Sarah Parsons Zackheim has worked at William Morrow, Doubleday, and New York Times Books. She is the author or coauthor of three books, including Dress Your House For Success.