By: Joseph J. Giampalmi and
Updated: 11-09-2022
From The Book: College Writing For Dummies 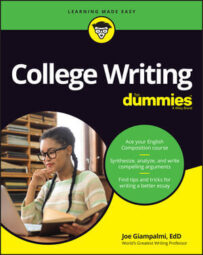 Explore Book Buy On Amazon
College students have style, and it shows with their aggressiveness for good grades, attire in the classroom, and energy on campus. This Cheat Sheet offers you help with your style when writing your college essay during your first year in college.

Eliminating unnecessary and overused words in your essays

Extra words in a sentence are as useless as a fifth wheel on an ATV four-wheeler. They not only serve no purpose, but also inhibit forward progress. Unnecessary and overused words also distract your reader’s understanding of your message.

Building style not only includes what you add to your writing, but also what you subtract from your writing. Here’s a look at additions by subtraction. Avoid the following style imposters.

As a general rule avoid repeating key words in the same sentence. Steer clear of writing a sentence, such as in the following:

Eliminate self-referencing yourself as the author, such as in the following:

Other self-references include the following phrases:

Write in the pattern you talk. Identify a topic and follow it with an action verb, as in the following:

Sources are high-priority to your college writing professors, who usually read the reference page before reading the content of your research paper. Here are categories of sources that your professors don’t want to see:

When you have questions about a source, ask your professor or a reference librarian.

Joe Giampalmi, EdD, is a hall-of-fame educator who’s been teaching students to mind their P’s and Q’s, use active voice, include Oxford commas, and support their arguments for more than 50 years. He has taught more than 100 English composition courses.