How Recognizing the Shapes of Words Aids Speed Reading

By: Richard Sutz and Peter Weverka and
Updated: 03-26-2016
From The Book: Speed Reading For Dummies 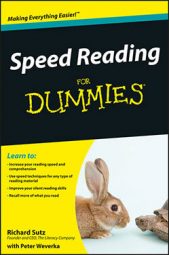 Speed reading up to 16 words at a glance is possible because when you read most words, you don’t see the letters in the words or the words per se. What you see on the page are shapes or images that you recognize from your past reading experience — that is, the words are in your vocabulary.

The only time you actually see a word and examine all its letters is the first few times you encounter it. You have to examine the letters closely and commit the word to memory. After it becomes a part of your vocabulary, you can recognize its shape. You can identify and process it quickly as part of a clump in the course of your reading.

In 1976, Graham Rawlinson, a researcher at Nottingham University, conducted an experiment to uncover what information readers get from letters and words when reading. He had volunteers read sentences in which the letters in the words were jumbled except for the first and last letters.

What Rawlinson discovered was surprising: People could read and comprehend the jumbled words almost as easily as unjumbled words. The experiment showed, Rawlinson wrote in New Scientist magazine, “that randomising letters in the middle of words had little or no effect on the ability of skilled readers to understand the text.”

Wehn you raed, you dno’t raed evrey leettr in ecah wrod. You look at the wrod as a wlohe.

If you’re a typical reader, you were you able to read the paragraphs without any trouble. This experiment suggests that

This example shows you that to some degree, reading words is just recognizing shapes.

Richard Sutz is the founder and CEO of The Literacy Company, developers of The Reader's Edge® speed-reading program. Sutz's program teaches silent reading fluency for effective and efficient speed reading. Peter Weverka is the author of many For Dummies books. His articles and stories have appeared in Harper's, SPY, and other magazines