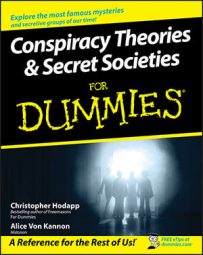 One of the strangest events surrounding the Beatles was the rumor in 1966 that band member Paul McCartney was dead. Not only was he dead, but was replaced with a double. More amazing was that the band seemed to be putting clues in their music and album covers to leak the truth — although the Beatles always denied any part in promoting the rumor.

The most famous elements were contained on the Abbey Road album cover. The four Beatles are shown walking across the pedestrian "zebra crossing" on London's Abbey Road, but there are curious clues. McCartney is in a suit, barefoot and out of step with John Lennon (dressed as a priest), Ringo Starr (dressed as an undertaker), and George Harrison (dressed in work clothes, like a grave digger). A Volkswagen Beetle is parked on the road, with the license plate "LMW281F," implying McCartney would have been 28 "if" he had lived, while LMW supposedly stood for "Linda McCartney Weeps."

In 1969, a Detroit disc jockey named Russ Gibb received a phone call from a listener named Tom, who announced that McCartney was dead, and for clues, to play the Beatles song "Revolution #9" backward. In reverse, the words that are repeated over and over, "number nine, number nine," sort of sound like "turn me on, dead man."

The rumors continued to spread and became a worldwide urban legend when a WABC disc jockey in New York rambled on about it on an overnight show that was heard over the clear channel AM station in two-thirds of the U.S. and halfway around the world. Afterward, there wasn't a campus radio station in the country that wasn't running a weekend-long "Paul-a-thon," with listeners calling in their favorite clues as they pored over the albums and fan magazines until their eyes fogged over. Grade-point averages plummeted all over the United States.

Conspiracists pieced together a hodgepodge of lyrics from several albums to create the story. Supposedly, McCartney had a fight with the other members of the band during the recording of Sgt. Pepper's Lonely Hearts Club Band and stormed out of the studio. He hopped into his Austin-Healey at about 5:00 a.m. on November 9, 1966, drove into the dark morning, crashed into a light pole, and was killed. Following the accident, a secret funeral was held, and the news was withheld from the public. A quiet search was quickly made for a McCartney look-alike/sound-alike — named Billy Shears — who finished the recording of Sgt. Pepper. It was Billy Shears who went on to record all subsequent Beatles albums and launch his own band, Wings.

Of course, all this started in the creative minds of a small group of college students who went cherry-picking through the lyrics of wildly different Beatles songs to invent the story. Unquestionably, the band was bewildered at first by the story, but John Lennon in particular seemed to enjoy playing along, while never exactly commenting on it openly.