Escalating the Vietnam War: The Tet Offensives of 1968

The Tet holiday is revered in Vietnamese society as a series of days to visit with and enjoy family and friends. It has also been a time of great victories over previous foreign invaders in Vietnam. Almost every year during the war, a Tet cease-fire was called and broken. So what made the Tet of 1968 so different? First was the extent of the attack. Most people in South Vietnam expected something to happen, but few expected the massive and coordinated NVA/VC (North Vietnamese Army/Viet Cong) assaults that took place.

On January 31, 1968, more than 80,000 NVA/VC soldiers launched the Tet Offensives and simultaneously attacked more than 150 hamlets, district capitals, provincial capitals, and autonomous cities. They attacked Saigon and the old Imperial capital at Hue. While they attacked throughout the country, the NVA/VC hoped and expected that the people of South Vietnam would rise up and join them in overthrowing the government of South Vietnam along with (in their words) their puppet-masters, the Americans. The uprising never happened, leaving the NVA/VC at the mercy of superior American and ARVN (South Vietnamese army) firepower and mobility.

Fighting in the streets: The battle for Saigon

The fighting in Saigon was intense because the NVA/VC concentrated a significant force there in the hope of capturing the city and ending the war. The American Embassy even came under serious threat when a group of VC soldiers attacked the compound. VC Sappers (personnel who infiltrated the defensive perimeter and threw explosives into bunkers or buildings) killed U.S. Marines and MPs guarding the embassy, but the VC couldn't hold up against the American reinforcements sent in to secure the facility and were eventually all killed. Although the NVA/VC enjoyed some initial successes in Saigon and elsewhere, U.S. and ARVN forces quickly rallied and began turning them back until the hoped-for general uprising turned into a devastating defeat. As more American and ARVN forces entered Saigon and counterattacked, they had to engage the remnants of the NVA/VC in house-to-house street fighting. By the first week of February, the ARVN assumed responsibility for the remaining operations to clean up Saigon.

Searching for a moral victory: The battle for Hue

The city of Hue is the former Imperial capital of Vietnam, and the fighting there reached an intensity and ferocity not closely matched anywhere else during the Tet fighting. The battle for Hue lasted 25 days and, unlike most of the other city battles, resulted in NVA control over much of the city. The city had been previously off limits to U.S. soldiers, which meant that soldiers were not already in the area, so Americans had to be brought in to help defend the city and help push the NVA out.

The fighting for Hue lasted until March when elements of the U.S. 1st Cavalry and 101st Airborne Division, 1st and 5th Marine Regiments, and numerous ARVN units finally forced the NVA/VC out of the city. All sides suffered heavy losses. The NVA lost 5,000 soldiers and had nearly 100 captured. The ARVN suffered more then 380 dead with nearly 2,000 wounded. American casualties were 210 died and 1,360 wounded. Hue itself suffered heavy damage as the battles destroyed and damaged nearly half the city.

The most surprising losses, however, didn't occur among the fighting soldiers or in the razed buildings. Americans and South Vietnamese later discovered that, upon entering the city, NVA/VC leaders rounded up South Vietnamese teachers and government officials and killed them. In what became known as the Hue Massacre, the NVA/VC murdered nearly 3,000 residents of Hue and buried them in a mass grave in the jungle outside the city.

Unfortunately, such horrific atrocities were not limited to Hue. Two weeks after the battle for Hue ended, U.S. forces committed what has become the most publicized, talked about, and politicized atrocity of the Vietnam War, the My Lai Massacre.

While the fighting in Saigon started and ended rather quickly, the longest battle of the Tet Offensive occurred in the mountains overlooking the HCM Trail near Khe Sanh (see Figure 1). Although the initial hill fights had ended in May of 1967, the NVA/VC hadn't given up hope that they could deliver a devastating blow to the American effort by overrunning and capturing the U.S. base at Khe Sanh. During the intervening months, from May 1967 until January 1968, the NVA/VC built up their forces and supplies and prepared for a massive siege to capture this mountain outpost. 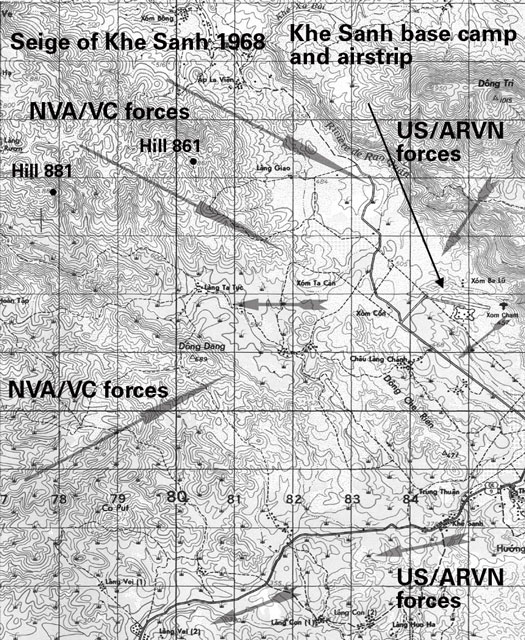 
The fighting and subsequent siege began on January 21, a little more than a week before the Tet Offensive began. General Vo Nguyen Giap, the North Vietnamese strategist who planned the attack on Khe Sanh and much of the Tet Offensive, hoped, along with the rest of North Vietnam, to accomplish several goals:

In this way, Giap and other North Vietnamese strategists hoped to repeat at Khe Sanh what they had accomplished at Dien Bien Phu in 1954, the decisive battle that defeated the French and effectively ended the French Indochina War. The analogy between the two battles was apparent to Americans and at the outset of the battle for Khe Sanh, Johnson himself is quoted as saying, "I don't want any damn 'Dien Bien Phu!'"

Fortunately for Johnson, Giap and the North Vietnamese overestimated the likelihood of a general uprising among the South Vietnamese people and underestimated the ability of the U.S. and ARVN forces to deploy and redeploy as necessary to deal with all the threats of Tet and still maintain a strong enough presence at Khe Sanh to protect and outlast the siege.

The NVA/VC massed 40,000 troops in the hills of Khe Sanh in preparation for the siege and attacks. For their part, the U.S. Marines reinforced the Khe Sanh garrison with more than 5,000 Marines of the 26th Marine Regiment. As the battle and siege continued during January, February, and March, the U.S. and ARVN tried to reinforce the U.S. Marine garrison and brought in massive amounts of artillery, close air, and naval gunfire support. The U.S. Marines also received enough ammunition, food, and other essential materials through aerial resupply to help them outlast the siege.

During the siege, the NVA bombarded the Marine base with artillery, mortars, and rocket fire and early in the process detonated much of the fuel depot and ammunition dump. They dug trenches and tried at one point to launch a ground assault, but the U.S. Marines repulsed the attacks. In addition to attacks on Khe Sanh, NVA forces also attacked and overran the Special Forces camp at Lang Vei, just south of Khe Sanh.

The siege of Khe Sanh ended on April 8 after the 1st Cavalry Division reopened Route 9 and made contact with the Marines at Khe Sanh. Both sides suffered significant casualties: U.S. forces lost nearly 300 soldiers, more than 1,400 wounded; estimates show that the NVA lost somewhere between 10,000 and 15,000 soldiers. By April, the siege of Khe Sanh and the Tet Offensive officially ended but the aftershocks resonated for months, even years.

Without a doubt, the U.S. and ARVN forces won the various battles involved with the 1968 Tet Offensives and repelled every attack except those on Lang Vei and Kham Duc. The NVA/VC lost more than 45,000 men and had nearly 1,000 captured. But the real surprise of Tet 1968 had nothing to do with the attacks throughout the cities, the siege of Khe Sanh, or even the horrific casualties suffered by soldiers and civilians on all sides.

What no one foresaw was what became two of the most significant casualties of the Vietnam War:

This was so important because, until 1968, the majority of Americans supported the war and believed what the U.S. government told them regarding the war. Today, Americans looking back on the events, remark about how they lost faith in the government when Tet 1968 occurred and it appeared the government had been lying to them about progress in the war.

Johnson's decision not to seek reelection was so important because the will of the American people flowed from and through the president, making him the symbolic embodiment of U.S. national will. When Johnson lost faith and gave up, it became difficult for many Americans to continue supporting a war the president no longer supported. Tet 1968 ultimately proved that the communist strategy of a protracted war designed to drain the will of the American people was a much better approach than was the U.S. strategy of attrition.

Perhaps the greatest irony of the situation was that the U.S. and ARVN forces succeeded in destroying most of the remaining Viet Cong during Tet. This meant that after Tet, the NVA had to take over nearly all the fighting in South Vietnam. As a result, the U.S. and ARVN forces could put a more concerted effort behind fighting NVA units and building up South Vietnamese political, military, and social institutions. But American attitudes toward the war shifted remarkably after Tet, so the gains that the military netted during Tet 1968 were lost on their long trip across the Pacific to the U.S.