How to Draw Fashion Figure Noses

By: Lisa Arnold and Marianne Egan and
Updated: 05-17-2021
From The Book: Fashion Drawing For Dummies 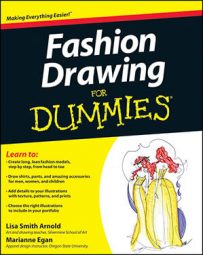 Explore Book Buy On Amazon
Keep noses under control in a fashion illustration. The idea is to create a great-looking nose without going overboard with too many shapes and shadows. You’re not illustrating an anatomy textbook, and the nose isn’t an area you want to stress. Oh, and realistic-looking nostrils aren’t at all fashion forward!

Draw a simple fashion nose from the front view. 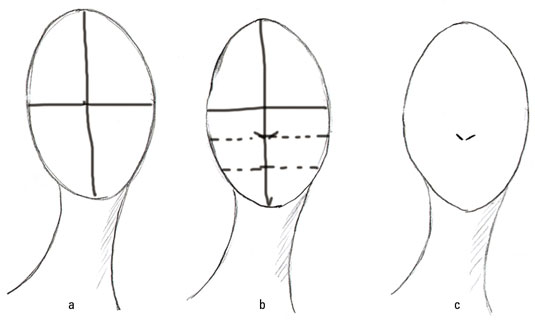 Female fashion noses breathe class and refinement. The sweet girl-next-door button nose is nothing to sneeze at, but it doesn’t fit a woman of high fashion.

Draw an oval for a face and a face grid. Divide the bottom half of the face into thirds and mark them with dashed lines. For the nose, draw two little slash lines in the center of the upper dashed line.

Fashion noses are much shorter than real noses. Figure c shows what this type of nose looks like after you erase your guide lines.

Sketch a man’s eyes and brows. Draw a slightly curved line starting right between the eyes and running down to where the tip of the nose begins. For the bottom of the nose, draw a couple of L-shaped marks slightly above the top of the upper lip.

Add nostrils by making the bottoms of the Ls a little darker.

Kids’ noses are simple and cute. Don’t get realistic or detailed; otherwise, their little faces will be overwhelmed.

Use a small sideways V.

Draw a small V shape to show the tip of the nose. Use this shape for the bottom of the nose, not for the line of the nose, which you can leave out on youthful faces.

Go for a simple upward arc.

Draw the nose in three-quarter view. 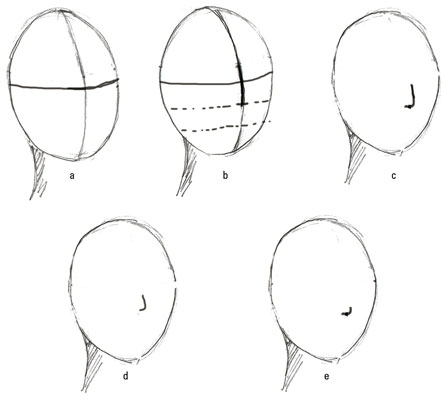 A three-quarter view nose is angled to the side. The nose from this view can be tricky to draw.

Draw a head with a face grid but shift the vertical line to the right side of the oval. Draw two dashed lines that divide the lower half of the face into thirds. The nose point goes on the upper dashed line. End with a short horizontal line heading to the left side to depict the bottom of the nose.

For women and children, the nose is a little more curved rather than pointy. Sometimes the slight differences in appearance come from the length of the top line of the nose: The longer the line, the more masculine it tends to look.

Draw the nose in profile view. 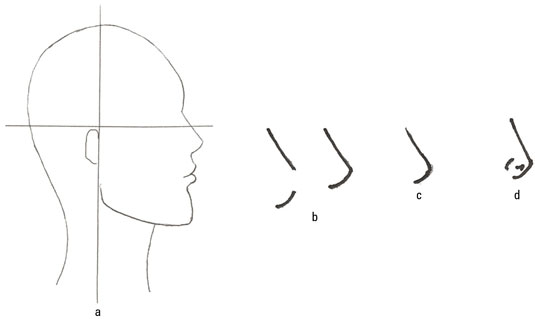 Noses in profile can be pointy and simple; rounded and simple; or either pointy or rounded with some nostril detail and shading. No matter which style you like, all these noses begin with two simple lines that meet up somewhere away from the face.

Draw a line that angles away from the face, and draw another line that’s a slight downward curve back toward the face. When you put these lines together, they create a nose in profile.

The top of the nose starts around the eye level line, and the nose finishes about a third of the way down the bottom half of the head.

For a nose with a rounded look, simply round out the point where the angled line meets the curve.