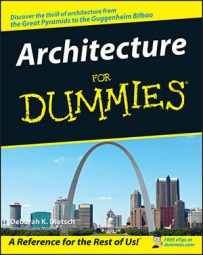 Explore Book Buy On Amazon
Today, American architects follow standards established by the Department of the Interior when preserving architecture. The following definitions for preservation, restoration, reconstruction and replication, and rehabilitation are included in these standards.

Sustaining the existing form, integrity, and material of an historic property is categorized as preservation. Preservation work focuses upon the ongoing maintenance and repair of historic materials and features rather than on extensive replacement and new construction.

One of the best preserved properties in America is Drayton Hall (1738-1742), a Colonial home near Charleston, South Carolina. Its brick structure has been maintained in its original condition without electricity or indoor plumbing.

Architects abroad often use different terms for preservation. Europeans often refer to it as protection, while British architects use the word conservation; in the United States, conservation is associated with the cleaning and repairing of works of art and building materials, as well as with land preservation.

Removing or replacing missing elements and accurately putting back the architectural form and details is called restoration. The goal is to recreate the historic building and its setting as it appeared at a particular period of time.

For example, the Pennsylvania State House (1732-1735), where the Declaration of Independence was drafted (the building is now called Independence Hall), was restored to recreate its appearance in 1776. A new steel structure was inserted to prop up its sagging roof. Some rooms were lacking floors, wood paneling, and furniture, so these elements were reproduced to look like the originals and added as well.

When a historic building has been destroyed, the reproduction of its architecture on the same site is referred to as reconstruction. Making an exact copy of the building is called replication; it is the most radical type of preservation.

Both of these techniques were used to resurrect European cities that were destroyed during World War II. After Warsaw was heavily bombed, the medieval center of the city was reconstructed — and in some cases, replicated. Existing fragments and archaeological research were used to help make it look just as it did before the war.

When a historic building is repaired, altered, or added to, the process is called rehabilitation. This process calls for upgrading the structure for contemporary use while preserving its historic and architectural character. Rehabilitation is also used interchangeably with renovation. It also may indicate adaptive use, which is the process of adapting a building for a different use.

One of the last great rehabilitation projects of the 20th century was the overhaul of Germany's parliament building in Berlin, the Reichstag, after the seat of government was moved there from Bonn. Designed by architect Paul Wallot, the 1894 neo-Renaissance building was almost burned down by the Nazis in 1933, heavily shelled during World War II, and renovated into offices and a museum in the 1960s.

In 1992, British architect Norman Foster won a design competition to renew the damaged Reichstag. He respected the history of the century-old structure (including damaged stonework and graffiti on the walls from Russian soldiers) while inserting a new glassy dome. Symbolizing the reunification of Germany, the large dome incorporates spiraling walkways and transmits daylight into the parliamentary chamber through skylights and a reflective cone at the center.