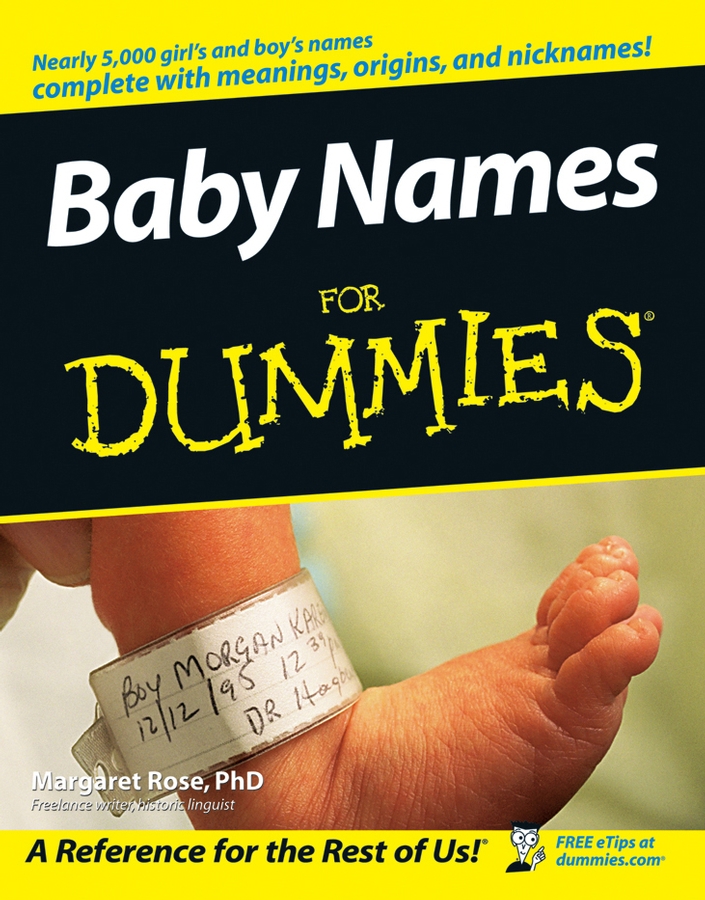 The fun and easy way to name the new bundle of joy
Brimming with over 5,000 names, from traditional to unique, this is the perfect reference for parents-to-be looking for naming guidance. It features a an impressive assemblage of options for both boys and girls-from Biblical, medieval, and Shakespearean names to musical and international names-along with a list of today's most popular names and the favorite names of previous decades. Each entry contains variant spellings as well as the name's meaning, history, and derivations. Plus, fun sidebars offer examples of celebrities who chose unique names for their little ones and perfect suggestions for future political leaders, artists, and movie stars.

Articles From Baby Names For Dummies

Right now, you're probably feeling very possessive about your child, which is only natural because you have all the control (and responsibility) over what your child's experiences will be, including the choice of a name. But while it would be silly to pick a name that you don't like, it's just as important to put yourself into your child's future shoes and try to make sure that he or she will like it as well. Watching out for naming pitfalls So you call yourself a rebel or unconventional or a nonconformist. Well, just because you don't want to follow naming rules or patterns when choosing a name for your child, doesn't mean that just anything goes. And on the flip side, just because you plan to follow the rules doesn't mean you won't make any mistakes. You can avoid common mistakes that parents make when picking a name for their children: Start anywhere except the beginning of baby-name lists. Have you ever wondered why there seem to be so many people with names beginning with A? Baby-name lists are usually organized alphabetically. Most people don't read through the entirety of "500,000 Baby Names" before starting to fall in love with a few choices. This means that, statistically, people who pick names this way are more likely to pick a name earlier in the alphabet. Know where your name ideas come from. If a name "just comes to you" and you can't remember where you got the idea for it, try to find out more about the name. Especially in the case of unusual or invented names, chances are you didn't simply come up with it off the top of your head. If you can't remember where it came from, how do you know it doesn't mean (or refer to) something embarrassing? Find out if it was a product name, or a small town in Eritrea, or the latest obscure espresso drink. If the name is at all questionable, you can be sure that at some point in your child's life, she will run into someone who recognizes it. Check out the current popularity (if any) of a name you are considering. You'd be surprised how many parents first discover that they've picked the current No. 1 name when their child hits pre-school and then wish they had chosen something less common. Names move quickly up and down the charts these days, so you can't assume that you'd automatically know whether a name is in the top ten. Discuss and consider names for both genders even if you're absolutely sure what gender your child will be (even ultrasound has been known to be wrong). There's nothing quite like going through life named Adam solely because your parents thought you were going to be a girl and when push came to shove, the only source of inspiration they had at hand was a Gideon Bible. (Not that there's anything wrong with Adam as a name, of course!) Knowing how names may shape a child's experience When considering possible negative consequences of particular names, you usually think in terms of childhood teasing. But there's a darker side to the first impressions of names. Scientific studies have shown that people respond very differently to certain names or certain types of names. You may have heard about experiments where different names were put on the same homework assignment and given to multiple teachers to grade. Names that were perceived as "old fashioned," like Bertha or Marmaduke, were given lower grades on the average. The problem is, "old fashioned" is a relative term. When those studies were first done, Emily and Ethan would have been considered old-fashioned names, now they're as current as can be. Names with novelty spellings can also fare badly. Sindee may be considered inherently more frivolous than Cindy. Diminutives are seen as less formal and so less serious than the full forms of names. Jimmy Carter made a bit of a stir by using Jimmy rather than James in politics. (At least he had the choice — name your son "Jimmy" and it's harder to go in the other direction.) You want to give your child every advantage . . . but there comes a point when you wonder whether maybe you ought to be challenging these attitudes instead. When it's a matter of someone considering a name "too old-fashioned," you can chalk it up to personal taste. But the same types of scientific studies show even stronger effects if a name looks "too African American" or "too Hispanic." If you're thinking twice about naming your daughter Shanika (whether you're African American or not) because you're worried that her resumes may end up in the second stack, or if you're really wavering between naming your son Jose after his grandfather, or going with Joseph instead because it'll make teachers think he's smarter, are you making a rational decision for your child's best interests or surrendering to prejudice? There is no good answer to this problem because we can't make prejudice disappear except in our own actions. Decide for yourself whether to make this consideration a factor in your choice of names.