7 Ways to Get Media on the Internet

By: John R. Levine and Margaret Levine Young and
Updated: 06-01-2021
From The Book: The Internet For Dummies 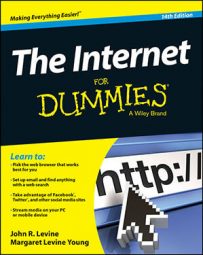 Explore Book Buy On Amazon
The internet has lots of options for getting the media you want. You can get your media fix in approximately ten zillion different programs and formats. Fortunately, they fall into a modest number of categories: free, streaming, purchased, shared, and rental.

Receiving media as a gift

The simplest approach is to download media offered for free and then play it. Visit NASA which has lots of free little movies on topics ranging from dust storms on Mars to how a roller coaster ride feels like taking off in the space shuttle. You can also find independent movies and videos.

Visit epitonic.com for an eclectic collection of music by artists, some well known and some obscure, released so that people can listen to it and make their own mixes.

Borrowing media by streaming it

Even on a broadband connection, downloading a whole media clip can take a while. Rather than download first and play later, streaming media downloads as it plays, thereby re-creating (in a complex digital manner) the way that radio and TV have worked since the 1920s. As with TV and radio, after it’s streamed, it’s gone — and if you want to play it again, you have to stream it again. Streaming audio can work over a dialup connection, but streaming video needs a broadband connection.

Most streaming media is provided on demand: You click a link and they send you whatever it is, sort of like a jukebox. Alternatively, sometimes streaming media is a single program to which you can listen in and hear what’s playing at any moment. Not surprisingly, it’s named Internet radio, and in many cases the audio stream is an actual radio program.

Apple iTunes makes buying music and video easy. Go to iTunes to listen to the first little bit of any song in its catalog. If you like it, you can buy your own, permanent copy that you can copy to your iPod, play on your computer, or burn on a CD.

You don’t have to be a Mac user to use iTunes; you can play the tunes by using the Windows version of the iTunes program. It’s no surprise that people buy in droves, making iTunes the biggest online music store. Likewise, many more websites sell music either from a web-based store or as an add-on to a rental service, most for about the same price as at iTunes.

Apple makes it easy to listen to and watch your iTunes music and videos on an iPhone, iPod, or iPad. If you have an Android or other smartphone or tablet, programs are also available for transferring your music and videos to your phone.

Playing media from CDs or DVDs you already own

You probably own a whole lot of digital music in the form of music CDs. Copying your music CDs to your computer is known as ripping, and it’s easy to do. Windows Media Player, iTunes, and other music programs can copy all tracks from a CD and put the songs into your music library so that you can play them from your computer or copy them to your MP3 player.

You can subscribe to audio programs over the Internet. A podcast is an audio file distributed over the Net for listening to on an iPod or another type of MP3 player or any computer with speakers. Many radio shows are available as podcasts; go to npr.org to find many of them. Lots of organizations and people make podcasts, too.

The original version of Napster was the first well-known music exchange service, allowing members to download MP3 music files from each other for free. The system was the first large-scale peer-to-peer (P2P) information exchange, where people exchange files with each other rather than download them from a central library.

Eventually, the big record labels sued and shut it down because most of the material that people exchanged was in flagrant violation of the music’s copyright.

The popular file-sharing system BitTorrent has thus far been able to fly under the legal radar, unlike LimeWire, which was shut down by a court order. They resemble an earlier Napster — a network from which you can download music for free, a certain amount of which is provided against the wishes of the owners of said music.

While you’re downloading music from other people’s computers, they are in turn downloading music from you, so they can significantly slow down your computer and your Internet connection. The music industry insists that these folks are morally reprehensible, but people use BitTorrent in particular to share large amounts of entirely legal and legitimate material along with the dodgy stuff. Stay away from it — as legal music gets cheaper and cheaper, why risk breaking the law to save a few bucks?

A great deal of music isn’t available for free, but it’s available for cheap. Some services offer monthly subscriptions that let you listen to large libraries of recorded music. Amazon offers streaming music as part of their $99/yr Prime package. Spotify offers a basic service with ads for free, or premium with no ads and some extra features for $10/mo ($5 for students.)

These rental services have enormous catalogs of music, and each one claims to be the largest. However, when you stop paying rent, your music vanishes. Remember — you never owned it.

You can find video rental websites too. For example, Netflix is known for its DVD-rental-by-mail service, but you can also stream videos on demand. Not all its DVDs are available for streaming, but for the ones that are, you see a Play button on the website. Amazon Prime includes video on demand, too.