Unlike cabled networks, wireless networks don’t need a hub or switch - just an access point.. If all you want to do is network a group of wireless computers, you just purchase a wireless adapter for each computer, put them all within 300 feet of each other, and voilà! — instant network.

But what if you already have an existing cabled network? For example, suppose that you work at an office with 15 computers all cabled up nicely, and you just want to add a couple of wireless notebook computers to the network. Or suppose that you have two computers in your den connected to each other with network cable, but you want to link up a computer in your bedroom without pulling cable through the attic.

That’s where a wireless access point, also known as a WAP, comes in. A WAP actually performs two functions. First, it acts as a central connection point for all your computers that have wireless network adapters. In effect, the WAP performs essentially the same function as a hub or switch performs for a wired network.

Second, the WAP links your wireless network to your existing wired network so that your wired computer and your wireless computers get along like one big happy family. Sounds like the makings of a Dr. Seuss story. (“Now the wireless sneeches had hubs without wires. But the twisted-pair sneeches had cables to thires. . . .”)

Wireless access points are sometimes just called access points, or APs. An access point is a box that has an antenna (or often a pair of antennae) and an RJ-45 Ethernet port. You just plug the access point into a network cable and then plug the other end of the cable into a hub or switch, and your wireless network should be able to connect to your cabled network.

The following illustration shows how an access point acts as a central connection point for wireless computers and how it bridges your wireless network to your wired network. 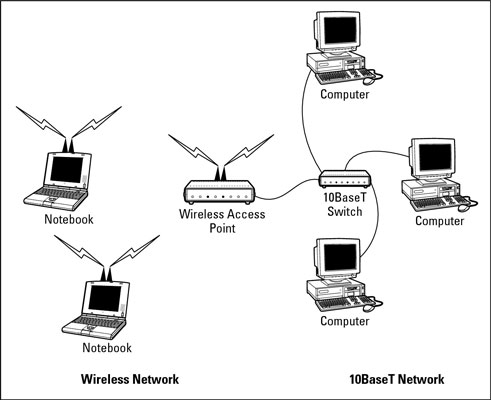 An access point and all the wireless computers that are connected to it are referred to as a Basic Service Set, or BSS. Each BSS is identified by a Service Set Identifier, or SSID. When you configure an access point, you specify the SSID that you want to use.

The SSID is often a generic name such as wireless, or it can be a name that you create. Some access points use the MAC address of the WAP as the SSID. 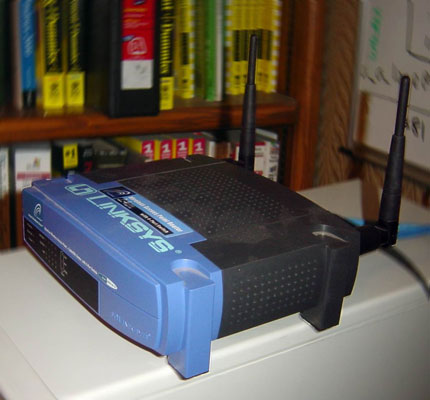 A multifunction access point that’s designed to serve as an Internet gateway for home networks sometimes is called a residential gateway.