If you like the raw power that comes from editing configuration files, fire up your favorite text editor and play with the Samba configuration file. It’s called smb.conf and is usually located in the /etc/samba directory, although some distributions may place this file in another location.

The following illustration shows you the smb.conf file being edited in the standard Text Editor program, which you can access by choosing Applications→Accessories→Text Editor. 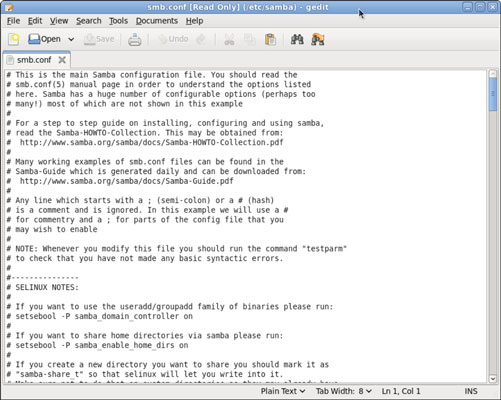 The overall structure of the smb.conf file is something like this:

The first section of the file, marked by the [global] line, contains options that apply to the entire server. These are the options that are set by the Preferences→Server Settings command in the GNOME Samba Server Configuration program. The following table lists a few of the more common settings that you can use in the global section.

Located after the global section is a section for each share that begins with the [sharename] line. The settings in these groups specify the details of a share, such as the comment and path. The following table lists the settings that you can specify for a share.

After you modify the smb.conf file and save your changes, you need to restart the SMB service in order for the changes to take effect.