A firewall is a security-conscious router that sits between the Internet and your network with a single-minded task: preventing them from getting to us. The firewall acts as a security guard between the Internet and your local area network (LAN). All network traffic into and out of the LAN must pass through the firewall, which prevents unauthorized access to the network.

Some type of firewall is a must-have if your network has a connection to the Internet, whether that connection is broadband (cable modem or digital subscriber line; DSL), T1, or some other high-speed connection. Without it, sooner or later a hacker will discover your unprotected network and tell his friends about it. Within a few hours, your network will be toast.

Alternatively, you can set up a server computer to function as a firewall computer. The server can run just about any network operating system, but most dedicated firewall systems run Linux. 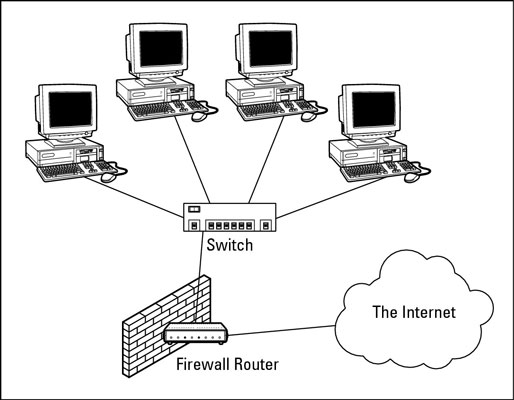 The term perimeter is sometimes used to describe the location of a firewall on your network. In short, a firewall is like a perimeter fence that completely surrounds your property and forces all visitors to enter through the front gate.

Doug Lowe still has the electronics experimenter's kit his dad gave him when he was 10. He became an IT director, programmer, and author of books on various programming languages, Microsoft Office, web programming, and PCs. But Lowe never forgot his first love: electronics.