An Introduction to Network Switches 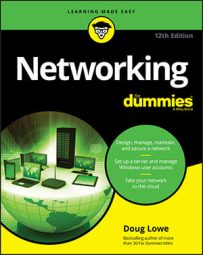 Explore Book Buy On Amazon
When you use twisted-pair cable to wire a network, you don’t plug the computers into each other. Instead, each computer plugs into a separate device called a network switch.

You need to know only a few details when working with network switches. Here they are:

Why is it called a switch?

In networking, a switch is a device that receives incoming packets of information from the network and determines where each packet should be sent. In that sense, a network switch is more like a railroad track switch than a light switch. Instead of turning something on or off, a network switch determines which of several tracks a particular packet of information should be sent to.

Consider a small switch with eight ports, numbered 1 through 8. When the switch is powered on, it pays attention to the devices that it can connect to on each of its eight ports. It does this by studying the Ethernet packets that arrive on each port and taking note of the sender’s address contained in each packet.

The network switch keeps track of which device is attached to each of its ports. When a packet arrives on a network port, the switch looks at the recipient’s address contained in the packet. The switch then determines which port the recipient is on and sends the packet to that port.

Thus, switches efficiently manage the travel of packets throughout a network by switching each packet traveling on the network through the correct cables, ensuring that each packet arrives at its destination.

Not all switches are created equal. Some switches are designed for very small networks in homes or single-office businesses. Small networks are so simple to manage that the switch itself doesn’t require any management or configuration of its own. You simply plug all the computers into the switch, and the network takes care of itself.

A managed switch has an IP address of its own and provides a web-based management console that you can access by pointing your favorite web browser to the IP address of the switch. After you’ve logged in to the management console, you can do things such as configure each port for different types of network traffic, view the amount of traffic on each port, and monitor each port’s performance, as well as the overall performance of the switch.

If a single switch doesn’t have enough ports for your entire network, you can connect switches by daisy-chaining them, as shown below. (Note that although you can daisy-chain unmanaged switches, it’s a good idea to use managed switches if your network is large enough to require more than one switch.) 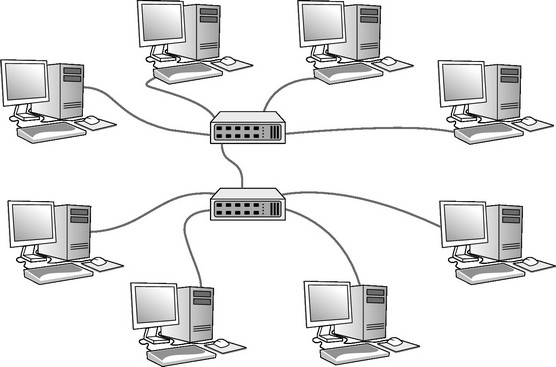 You can daisy-chain network switches together.

If your building is prewired and has a network jack near each desk, you can use a small switch to connect two or more computers to the network by using a single jack. Just use one cable to plug the switch into the wall jack and then plug each computer into one of the switch’s ports.

Some network switches, called stackable switches, can be expanded by adding additional switch modules that add additional ports to the switch. The additional modules may be in the form of physically separate switches that are connected via special interconnected ports, or they may be modules that can be inserted into a larger chassis.

Stackable switches are more expensive than non-stacking switches, but the simplicity of managing one large switch rather than managing multiple smaller switches may justify the added cost.

For example, if your company has 100 employees, and you have wired two Cat-5e cables to each user’s desk, you’ll need at least 200 1 Gb switch ports to support these users. You’ll also need a few extra ports for things like printers and Wi-Fi access points.

Your network design may end up with a total of five 48-port access switches, providing a total of 240 1 Gb ports to support the 100 users.

The following image shows a type of network that has five separate access switches that are linked together via a distribution switch. 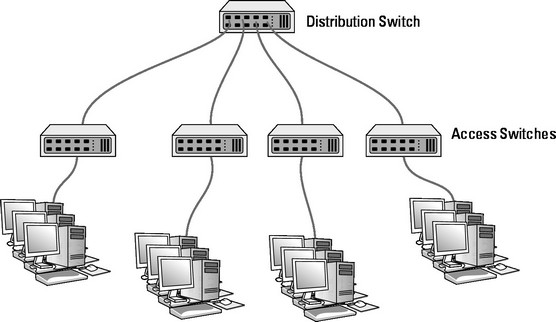 Want to learn more? Here are nine things you should keep in your network closet.