Counting Objects in a Data Stream

Explore Book Buy On Amazon
Learning to count objects in a stream can help you find the most frequent items or rank usual and unusual events. This algorithm leverages hash functions and approximate sketches. It does so after filtering duplicated objects and counting distinct elements that have appeared in the data stream.

You use this technique to solve problems like finding the most frequent queries in a search engine, the bestselling items from an online retailer, the highly popular pages in a website, or the most volatile stocks (by counting the times a stock is sold and bought).

You apply the solution to this problem, Count-Min Sketch, to a data stream. It requires just one data pass and stores as little information as possible. This algorithm is applied in many real-world situations (such as analyzing network traffic or managing distributed data flows). The recipe requires using a bunch of hash functions, each one associated with a bit vector, in a way that resembles a Bloom filter, as shown in the figure: 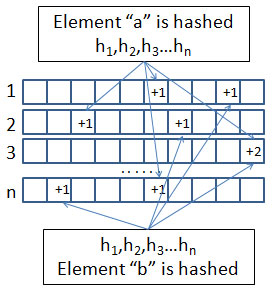 How values are updated in a Count-Min Sketch.

Because collisions are always possible when using a hash function, especially if the associated bit vector has few slots, having multiple bit vectors at hand assures you that at least one of them keeps the correct value. The value of choice should be the smallest because it isn't mixed with false positive counts due to collisions.