How to Stream Games on Twitch (The New TV)

Explore Book Buy On Amazon
Twitch is the name most often mentioned in esports spaces, surpassing even Twitter. Co-founded in 2006 by Justin Kan and his partners Emmett Shear, Michael Seibel, and Kyle Vogt as Justin.tv—which livestreamed Justin's life 24/7—and relaunched as Twitch in 2011, Twitch.tv was born from the idea of streaming media live. The site has become quite popular. Twitch has 15 million active users every single day!

Twitch is an amazing resource for esports players because you can find people playing all the most popular games on it 24 hours a day, seven days a week. Professionals stream. Casual players stream. Tournaments and leagues stream. If you want to watch esports, Twitch is the place to be.

Signing up on Twitch

As with all the services described in this chapter, you should use your gamer tag as your name when you register at Twitch.tv. As a viewer, you will be identified in chat and when you interact by this tag, but more important, if you choose to stream yourself, the address of your stream will be twitch.tv/your username. You want your gamer tag to show up in your stream address.

To register to start using Twitch:

When you’re logged in to Twitch, you can click the icon in the upper-right corner and scroll down to Settings to customize your profile . On this screen, you can change your profile picture or banner image by clicking the Update button next to each photo. You can also enter your bio into the bio text box below the images. After making changes, click the Save Changes button at the bottom of the screen to commit your changes. 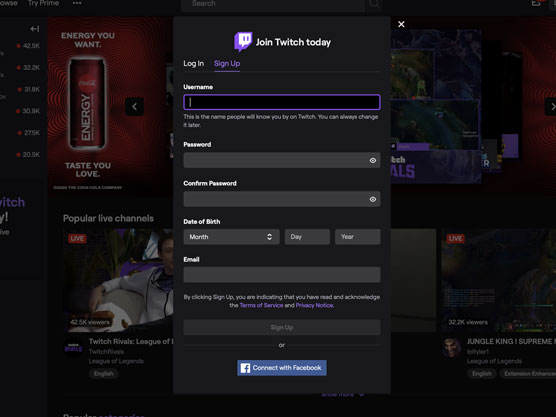 Twitching from channel to channel

Twitch functions like a mix of a television network and a social media platform. As a user, you have a channel, and if you are streaming, it appears on your channel. Think of a channel as being like a profile page; it’s a landing place for people to see your content. The channel page also has space for text content, a header, and other customization. Each channel also has its own chat room. One of the key aspects of the Twitch community is that a streamer reads and responds to the chat while streaming, creating real-time communication between the viewers and the caster.

When you find a channel that you like, you can mark it as a favorite by clicking the heart icon just above the video feed. Marking a favorite adds you to the notification system for that channel. It also adds that channel to your Favorites menu. The channels you have followed appear in the left sidebar of the main Twitch page when you log in.

If you love a channel and want to reward the content creator, you can show your love through money. Many channels owned by Twitch affiliates and partners allow you to subscribe using money. In those cases, you also gain special benefits that vary from channel to channel, such as custom emoticons or access to special in-game items or giveaways.

How Twitch changed the esports game

Most esports happen online. Before the advent of Twitch, fans had a hard time seeing competitions live. Even face-to-face tournaments were limited to those who could travel to be there in person. With Twitch, anyone with access to a computer and the Internet can watch esports. Fun fact: Twitch was named for the twitch muscle reactions needed to be an elite esports player!

With the massive user base, Twitch is always on, and esports fans have constant access to content. Twitch also offers the incentive of potential profit generation to make sure that streamers can see the clear benefit of using the service.