How to Diagnose Watering Problems in Orchids

By: Steven A. Frowine and National Gardening Association and
Updated: 03-26-2016
From The Book: Orchids For Dummies 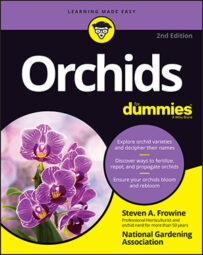 Overwatering and underwatering orchids show many of the same symptoms because the effect of both practices is the same — damaged or destroyed root systems, which result in a dehydrated orchid.

The signs of dehydration include the following:

To evaluate whether over- or underwatering has caused these symptoms, remove the orchid from its pot. Many beginner growers are reluctant to do this, but if you're careful, removing the orchid from its pot won't disturb them and it's an absolutely necessary procedure to see what's going on with the root system.

To determine if you've under- or overwatered your orchid, follow these steps: