How to Make and Call New Functions in Your Minecraft Mods

Here are the primary characteristics of the main function:

The main function is essential for writing mods, but there are reasons for having other functions, too. In the same way that chapters in a book let you group ideas and name those ideas, functions allow you to group code and name the grouping that results.

Here’s an example of a long main function. In this mod, two stories are being told: The Three Pigs and Goldilocks and The Three Bears. 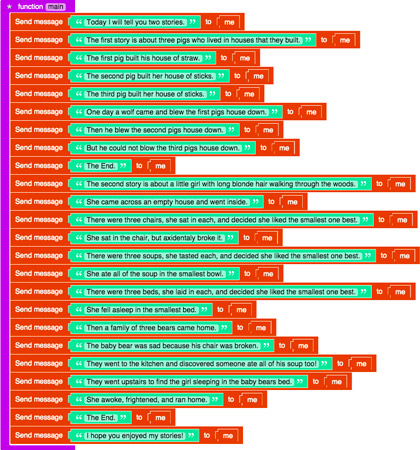 On Line 13 of the code, you can see that the modder misspelled accidentally as axidentaly. Someone might catch this mistake while testing the mod, but finding it will be difficult because you have to read each word.

Finding the problem is much easier if the code uses other functions because then you can look for the error only in the Goldilocks and The Three Bears function.

Having shorter functions is useful because then you can rearrange large parts of the code quickly. This image shows how simply swapping two lines of code can change the order in which the stories are told.