How to Create Minecraft’s 16 Dyes

Explore Book Buy On Amazon
Minecraft has a dye for every color in the rainbow. (You can even use dyed blocks to build rainbows, among other things.) Here, you will find recipes for each dye.

Bonemeal is the color white in Minecraft. Because wool is commonly white, bonemeal is usually used as a dye ingredient in other dyes (such as lime green or pink).

To craft bonemeal, place a bone (acquired from a killed skeleton) anywhere on the crafting grid, yielding 3 bonemeal. 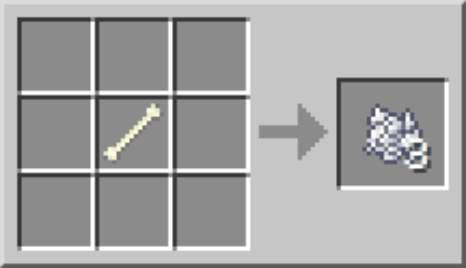 Light gray dye, which is used only as a color, can be crafted in multiple ways, such as using one of three flowers that grow randomly. Azure bluet, oxeye daisy, and white tulip all produce light gray dye when a single flower is placed anywhere in the crafting grid.

Another way is to place 2 bonemeal and 1 ink sac (from killing squids) in the grid, yielding 3 dyes. Finally, gray dye can be crafted with bonemeal to produce 2 light gray dyes.

Getting gloomier with gray dye

Gray dye is considered a secondary color in Minecraft. Though gray sheep naturally occur for gathering gray wool, gray dye can be crafted only by mixing 1 ink sac and 1 bonemeal, yielding 2 gray dyes.

Mixing up black with ink sacs

Sheep can naturally be black, and an ink sac can be used as black dye (without crafting or smelting it in a furnace). Ink sacs are gathered from killing squids. The ink sac is a common ingredient in dyes.

Ink sacs don’t exist in Survival mode in the Pocket Edition (PE) version, making both black and gray unavailable. However, you can find ink sacs in Creative mode.

Red, as its name implies, is obtained by crafting a poppy, red rose bush, or red tulip similar to the flower recipe in light gray dye. Simply place one of those flowers into a crafting grid to yield 2 red dye. 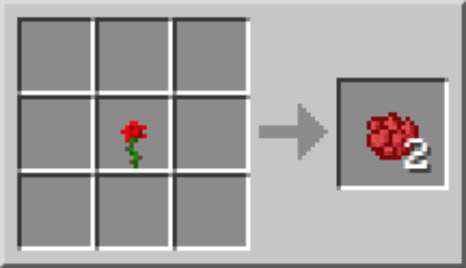 In the PE version, red is crafted in the same way, because these flowers have been added in the latest update. (In earlier versions of Minecraft PE, you made red dye from beetroot.) Alternatively, the PE version enables you to make red dye by placing a red mushroom into a furnace. Red, a primary color, is a common ingredient in making secondary colors. 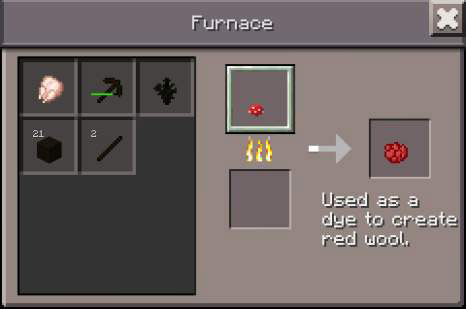 You can mix together pink dye in one of two ways:

The primary color dandelion yellow dye is crafted by placing a dandelion or sunflower into the crafting grid, yielding 2 dyes. 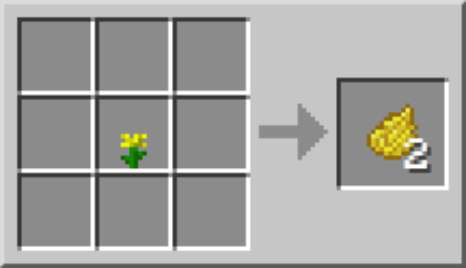 You can create orange dye by crafting orange tulips.

Green is considered a primary color in Minecraft and is therefore a crafting ingredient in other dyes. You craft green by smelting cactus in a furnace. 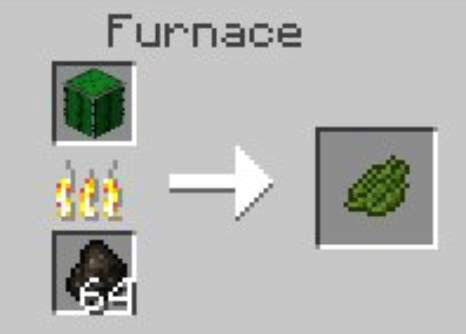 Lapis lazuli is obtained by mining. When you mine lapis lazuli with a stone pickaxe (or better), you get four to eight pieces for your inventory. You can use lapis lazuli immediately as dye or craft lapis lazuli into various items, including a block for building or decorating. Although lapis lazuli doesn’t need to be smelted or crafted as a dye, you can use it in other dye recipes.

Light blue can be created by crafting a blue orchid anywhere in the crafting grid.

Cyan, a blend of green and blue, is a secondary color that’s commonly used to achieve an aquatic look. To craft, place 1 cactus green and 1 lapis lazuli anywhere in the grid to yield two cyan dyes.

Purple, a secondary color, is created by placing 1 lapis lazuli and 1 rose red anywhere in the crafting grid to yield 2 purple dyes. Purple is commonly used to create a royal effect when applied to decorative blocks. You can also use purple dye to create magenta dye.

Magenta can be crafted from allium (yielding 1 dye) or a lilac (yielding 2 dye) placed anywhere in the crafting grid.

Similar to black and blue, brown isn’t crafted. You just need to find cocoa beans in the jungle biome. Cocoa beans can also be farmed.

Though also a food item, cocoa beans are recognized as a dye when you apply them.

Sarah Guthals, PhD, is a social software engineer, entrepreneur, and former engineering manager at GitHub. She is coauthor of Helping Kids with Coding For Dummies. Stephen Foster, PhD, is the CEO of ThoughtSTEM, a company that teaches computer science to kids across America. Lindsey Handley, PhD, is the COO of ThoughtSTEM and has hundreds of hours of experience as a classroom instructor for Minecraft-based science and computer science classes.