Engineering with Redstone in Minecraft 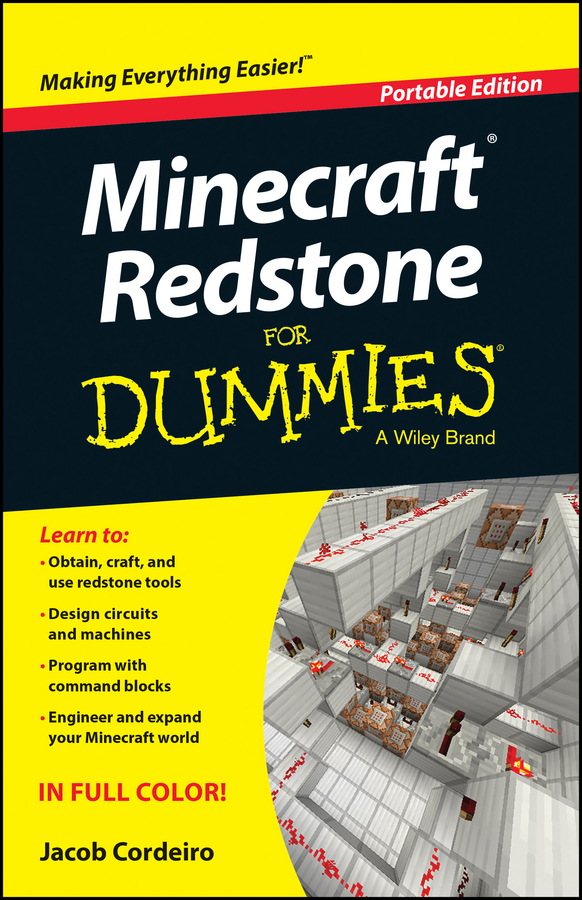 Explore Book Buy On Amazon
Redstone is one of the more advanced concepts in Minecraft. You can obtain redstone dust by mining redstone ore underground. You can spread this dust across the ground as wire, attach it to levers or doors, and craft it into torches and repeaters to build machines. Whether you want a lever that performs two tasks at a time, a combination lock, or a giant virtual computer, you can build it by cleverly arranging redstone dust.

Put simply, redstone dust carries power. While holding a lump of redstone dust, right-click the ground to place it there, at which point it becomes a redstone wire. In its default state, the redstone wire is uncharged, which means that it does nothing.

When the redstone is powered by a device such as a lever, tripwire, button, or pressure plate, the wire begins to glow red and transmits power to open doors, ignite explosives, or activate dispensers. The following figure shows a pressure plate connected to a mechanism that ignites three explosives at one time. 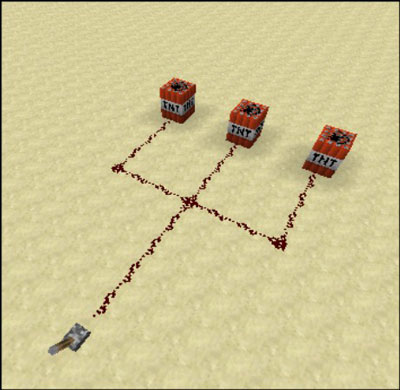 Redstone dust can transmit power and perform more tasks than you can normally complete by pulling a lever. You should know these concepts about redstone dust. It can

By carrying power in your world, you can achieve great accomplishments by simply pressing a button. 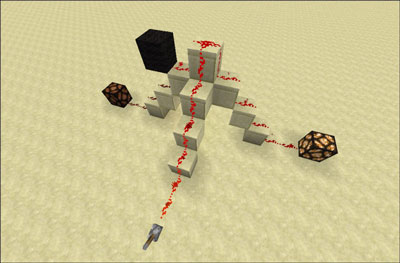 Of course, you can craft other items to improve your redstone creations. These allow you to build advanced circuits and accomplish more interesting goals.

A redstone torch is a useful resource that's crafted with redstone dust and a stick. It provides a constant source of power to everything next to it, above it, and below it, and it can be placed on floors or walls. It can even power the block directly above it.

Redstone torches never burn out on their own, but you can turn them off by powering the blocks they're placed on, as shown in the following figure. 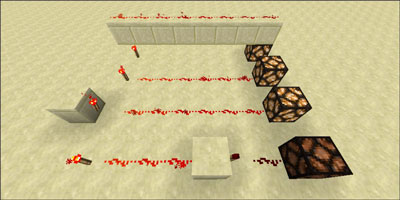 Redstone torches are important because they're power sources that can be turned off by other parts of the circuit. Thus, the clever arrangement of redstone torches can allow for powerful circuits such as combination locks or programs.

Redstone repeaters are interesting little mechanisms that can be placed on the ground like redstone wire, though they have a few extra faculties. They The following figure shows examples of using redstone repeaters.

In addition, if you place a redstone repeater so that it powers a second one from the side, it locks the second repeater's On-Off value. Then the circuit can store binary memory, which is useful in advanced designs. Run a redstone repeater into a block to easily make a powered block.

You can accomplish a great deal by using circuits, like opening doors, moving blocks with pistons, igniting explosives, playing music. You'll find, as you play Minecraft, that redstone can enhance many circuits.