Being Random with Code and Minecraft

When you code in Minecraft, you can use a random integer to make your code behave in random ways. An integer is just a number; the random integer Math block in LearnToMod chooses a random number between two numbers (1 and 10, for example) every time the code is run.

The first time you run this code, the result might be 5; the second time, it might be 8; and so on.

You can use this random integer block to spawn creepers or materials at random places in your Minecraft world.

The capability to generate a block at a random location can be useful for making the Capture the Flag game more exciting (where players have to race one another to find an object hidden somewhere on the map) because the flags are placed in random spots, making them more difficult to find.

You should have a basic knowledge of how drones work so that it’s easier for you to spawn blocks or entities.

To use a drone to spawn blocks or entities, follow these steps: 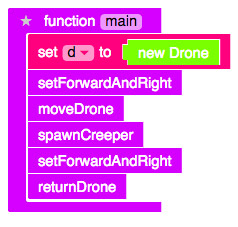 Pay close attention to your code.

The drone doesn’t return to its original location.

Suppose that FORWARD is set to 5 and RIGHT is set to 8 the first time you call setForwardAndRight. Your drone will move forward 5 squares, move to the right 8 spots, and then spawn a creeper. When you call setForwardAndRight again, suppose that the Forward setting is 6 and the Right setting is 9: Your drone moves backward 6 squares and right 9 squares, leaving it a block off diagonally from where it started.