Explore Book Buy On Amazon
When you have more immediate losers in your bridge hand than you can afford to make your contract, but you also have an extra winner, use that extra winner immediately before you give up the lead in the trump suit. If you don’t, your opponents will mow you down by taking their tricks all at once.

However, if you can draw trumps without giving up the lead, do that first and then take your extra winner.

This image shows you the importance of taking your extra winners before drawing trump to avoid giving up the lead. In this hand, your losers are immediate — if your opponents get the lead, you can pack up and go home. 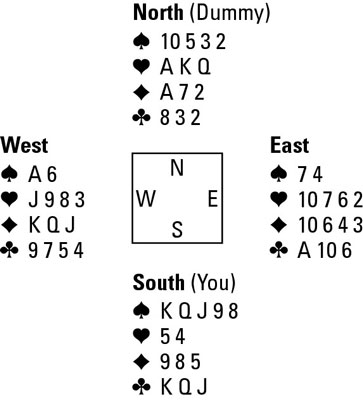 Your contract is for ten tricks, with spades as the trump suit.

After you count your losers, you tally up the following losers and extra winners:

Here’s how play might go: You never got to use your extra winner in hearts because you drew trumps too quickly. When you led a spade at the second trick, you had four losers, all immediate. And sure enough, your opponents took them — all four of them.

If you want to make your contract on this hand, you need to play that extra heart winner before you draw trumps. You can’t afford to give up the lead just yet. The winning play goes something like this:

You may think that playing the ♥AKQ before you draw trumps is dangerous. But you have no choice. You have to get rid of one of your immediate diamond losers before giving up the lead if you want to make your contract. Otherwise, you’re giving up the ship without a fight.