Playing Bridge: Rebidding After Your Limited Response of 1NT

Explore Book Buy On Amazon
When you respond 1NT to your partner’s opening bid in bridge, you limit your hand, showing six to ten HCP, and your partner is captain. Nevertheless, developments may force you to make yet another decision. Here are a few of those developments.

Take a look at these cards to see some hands in which your partner’s rebid may invite you to bid again. 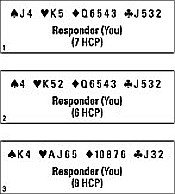 You may still be up to bat after your 1NT response.

For each of the hands above, the bidding has gone as follows:

If your partner has a balanced hand and wants to keep the bidding in notrump, she’ll make one of the following bids: If your partner invites you to game by bidding 2NT, refuse the invitation by passing with the first two hands. With the third hand, accept and bid 3NT.

Choosing between two of your partner’s suits

After your 1NT response, your partner may choose to bid a second suit. Unless you have a six-card suit of your own, your partner wants to know which of those two suits you prefer.

These cards show you a hand in which you must choose between two suits that your partner bids.

Choose carefully between your partner’s suits.

For this hand, the bidding has gone as follows:

In this bidding sequence, your partner’s opening bid of 1♠ says, “I like this chapter. I get an opening bid on every hand.” Your 1NT response says, “Stop your crowing; I have nothing again.” When your partner rebids 2♥, she asks you, “Which of my suits do you like better?” Your 2♠ response says, “I don’t like either one, but I prefer spades to hearts because I have an equal number of cards in both suits. Besides, Kantar is watching my every move.”

When your partner passes, the unspoken message is, “Thanks for giving me a break and allowing me to play this hand in spades, where we have seven trumps between our two hands, not in hearts, where we have only six.” Obviously, you need to outgun the opponents in the trump suit — not necessarily in terms of the high cards, but more in the numerical department. You must have more trumps than they do, or else bad things can happen — very bad things. Don’t ask.

Ideally, you want to have eight or more trump cards between the two hands every time you play a trump contract. However, in the real world, you don’t always have an eight-card fit. You may have to make do with a seven-card trump fit. If you wind up playing a contract with fewer than seven trump cards between the two hands, the wheels have come off.

So when giving preferences to your partner, make sure you concentrate on playing in the trump suit in which you expect to have the most cards, not the one in which you have the highest cards.

Going with your own long suit

With this hand, you get a second chance to bid your own long suit.

When the two hands don’t mesh, you may choose to bid your own long suit.

In this hand, the bidding has gone as follows:

If your bids could talk, they’d be shouting the following messages to each other:

1NT: “Good for you. I have a weak hand with only six HCP, but I have to respond, or you’ll disown me. I’m not nearly strong enough to bid 2♣ with this particular six-card suit, which would show eleven or more HCP, so I am hedging with 1NT.” (If the club suit were stronger you could bid 2♣ directly with only 10 HCP. AKJxxx, AQJxxx, and AK109xx are examples of suits that would require only 10 HCP to respond 2♣.)

2♥: “Hey, there. Hearts is my second suit. Which of my two suits do you like better?”

3♣: “I hate both of your suits, but I have a pretty strong six-card suit of my own, which is clubs.”

Pass: “This is the end of the trail, amigo. You have shown six or more clubs, and we have an eight-card fit, but because you guarantee a weak hand and I have a minimum hand, I know enough to get out of this mess right now.”