How to Use the Bridge Hold-Up Play

Explore Book Buy On Amazon
In bridge, you have countermeasures to opponents with winning tricks in a notrump-contract suit. The hold-up play is a technique that may stop your opponents dead in their tracks. No, the hold-up play doesn’t involve robbing a bank. The successful hold-up play allows you to cut the lifeline between your opponents’ hands.

The typical hold-up play involves taking an ace on the third round in the suit your opponents have led. The idea behind the hold-up play is to try to void one opponent in this suit. Later, if the opponent who’s void gets the lead, he won’t have any cards left in the suit to lead over to his partner, who’s sitting over there champing at the bit with winning tricks.

Your opponents attack your weakest suit, in which you have the ace but no other significant honor cards. You have to drive out an opposing honor card to make your contract. In other words, you’re going to have to surrender the lead:

This image shows a hand where you can commit the perfect crime — a successful hold-up play. 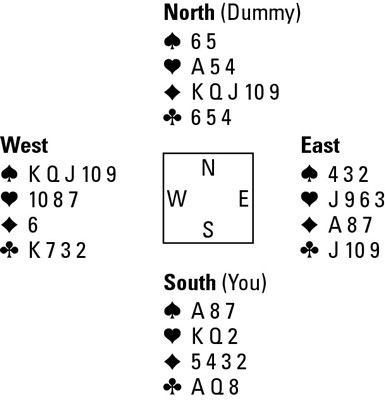 In the hand shown in this image, you need to take nine tricks. West leads the ♠K with the intention of driving out your ♠A and then making the rest of his spades into winning tricks. After the lead, the dummy comes down, and it’s your turn to enter center stage by counting your sure tricks, suit by suit:

You have five sure tricks; you need nine, and those diamonds in the dummy offer your only chance of making your contract. If you can drive out the ♦A, you get four diamond tricks just like that. But life isn’t quite that easy. You have that little matter of the ♠K lead to deal with.

When you play a hand, the opening lead is a very important card because it tells you a lot about what your opponents are up to. Make sure to take a good look at the opening lead. In the case of the cards in the preceding image, the lead of an honor card by West, the ♠K, sends a special message around the table that he has the ♠KQJ or the ♠KQJ10.

So, let the bad guys have the first two spade tricks, and you’re going to win the third round of the suit with the ♠A. By holding up the ace until the third round, you’ve isolated the two remaining winning spades with West. East has none. Now you can turn your attention to diamonds, which increases your sure trick out from five to nine.

In bridge, when a particular opponent has winning tricks and can hurt you by gaining the lead, you call that opponent the danger hand. For example, in the preceding image, after you win the third round of spades, West is the danger hand because West has two winning spades. Stay clear of West.

Eddie Kantar is a grand master in the World Bridge Federation and a two-time world bridge champion. He's a writer, a teacher, and an inductee to the Bridge Hall of Fame.