How to Take Tricks with Trumping in Bridge

Playing a hand of bridge with a trump suit has its advantages. For example, if you play a hand at a notrump (NT) contract, the highest card in the suit led always takes the trick. If an opponent with the lead has a suit headed by all winning cards, that opponent can wind up killing you. She can just keep playing all her winning cards — be it four, five, six, or seven — taking one trick after another while you watch helplessly.

However, when the bidding designates a trump suit, you may well be in a position to neutralize your opponents’ long, strong suits quite easily. After either you or your partner is void (has no cards left) in the suit that your opponents lead, you can just play any of your cards in the trump suit and take the trick. This little maneuver is called trumping your opponents’ trick (which your opponents really hate).

The hand in this image shows you the power of playing in a trump suit. 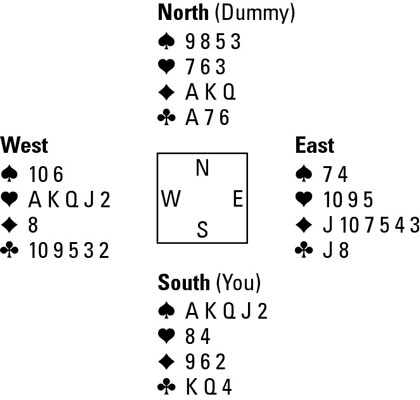 In this hand, suppose that you need nine tricks to make your contract of 3NT (notrump). Between your hand and the dummy, you can count 11 sure tricks: five spades (after the ♠AK are played and both opponents follow, the opponents have no more spades, so the ♠QJ2 are all sure tricks), three diamonds, and three clubs.

How you play the hand depends on whether someone declares a trump:

Assume that during the bidding, spades becomes the trump suit and you need ten tricks to fulfill your contract. When West begins with the ♥AKQ, you can trump (or ruff) the third heart with your ♠2 and take the trick. (You must follow suit if you can, so you can’t trump either of your opponents’ first two hearts.) Instead of losing five heart tricks, you lose only two.