How to Take Bridge Tricks in Long Suits

Explore Book Buy On Amazon
In bridge, trump cards can prove invaluable when you need to establish the dummy’s long side suit (the suit other than the trump suit with the greatest number of cards). Tiny trumps can fell your opponents’ aces, kings, and queens in the suit you’re establishing. You can use your trumps to set up winners in the dummy’s long suit, with or without honor cards.

You may not believe it, but you can set up tricks in long suits, even if you don’t hold a single honor card (the ace, king, queen, jack, or ten). All you need is a five-card (or longer) suit in the dummy, entries to the dummy, and persistence.

When attempting to coax a trick or two out of such a scrawny five- or six-card suit, your strategy is to play the suit and keep playing the suit at every opportunity until your opponents finally run out of cards in the suit. This image shows a really pathetic five-card suit. Here’s how you can play it to get some tricks: 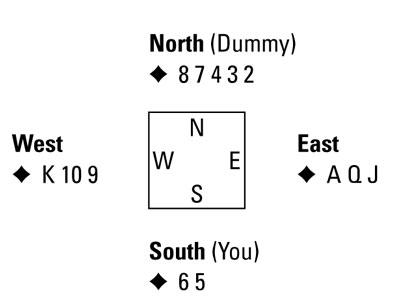 Of course, you still have to draw trumps, and you still need another entry to the dummy to enjoy your two diamond winners. But you can do it!

Take a look at a five-card suit with some beef, shown in this image. Say that spades is your trump suit. Here’s how you play it: 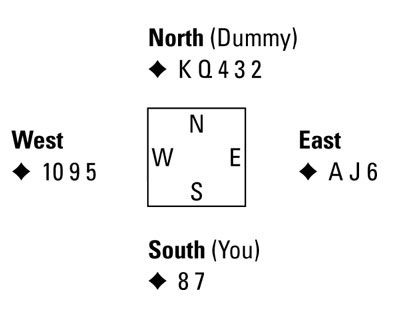