How to Save Trumps in the Dummy in Bridge

In a hand of bridge, your opponents watch you try to trump your losers in the dummy when you lead the dummy’s short suit, and they don’t like it. You’re trumping their tricks! But for every strategy in bridge, a counterstrategy exists.

Each time you give up the lead in the dummy’s short suit, expect clever opponents to return a trump. Each time they lead a trump, that’s one less trump in the dummy you have to trump a loser.

You may be able to take the sting out of your opponents’ trump leads if you save enough trumps in the dummy to outlast their attack. This image shows you a hand in which you can ward off any trump leads from the opponents. 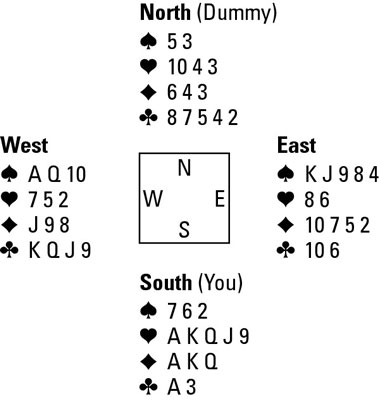 Your contract is to take ten tricks, and hearts is the trump suit. West leads the K. First, you take stock of your losers; you can afford to lose only three tricks:

The nerve of your partner to present you with such a dummy! However, you do have a ray of hope. Did you notice that the dummy has two spades, one fewer spade than you have? If you play spades twice before you draw trump, you can void the dummy in spades. You can then trump your third spade with one of the dummy’s hearts, reducing your loser count to three.

You have to give up the lead twice in spades, but even if your opponents lead a trump each time they have the lead, you’ll still have one trump left in the dummy that you can use to trump your third spade. Strike one for the forces of light.