Explore Book Buy On Amazon
When the dummy is on your left in a hand of bridge, you can see what’s in the hand that plays after you do. So, if you’re playing second hand (the second person to play) and the dummy is visible, you usually know what the declarer is planning to play from the dummy.

When the dummy is on your left (see this article for the dummy on your right), you can often just let common sense take over. The cards in this image show you a case in which you can very easily think through your defense because you can see the dummy. 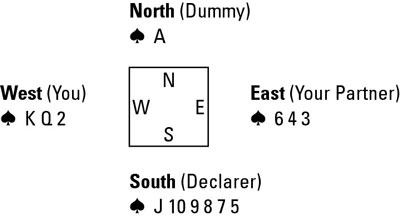 No matter which spade South leads, play the ♠2 because you can see that the ♠A must be played on this trick. By playing the ♠2 first, you conserve your ♠K and ♠Q for taking later tricks.

Here are some more tips on playing second hand with the dummy on your left: