How to Play a Bridge Hand of Small Cards

If your bridge hand contains only small cards for a given suit, don’t give up hope! Having any seven cards between the two hands in a game of bridge may mean an extra trick for you — if your opponents’ cards are divided 3-3.

The hand in this image shows you how any small card can morph into a winner when your opponents’ cards are split evenly. 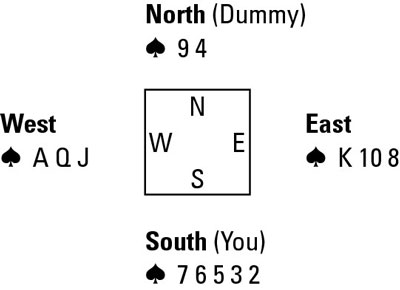 You have seven cards between your hand and the dummy, the signal that something good may happen for your small cards. Of course, you’d be a little happier if you had some higher cards in the suit (such as an honor or two), but beggars can’t be choosers.

Remember Cinderella and how her sisters dressed her up to look ugly even though she was beautiful? Well, those five cards in South are like Cinderella — you just have to cast off the rags to see the beauty underneath:

You conceded three spade tricks (tricks they had coming anyway), but established two tricks of your own by sheer persistence.