How to Make an Opening Bid in Bridge

Explore Book Buy On Amazon
Making the first bid in a hand of bridge can be nerve-wracking for novices. After the cards are dealt, you pick them up, sort them, and evaluate the strength of your hand. Then, it may be you who gets make the first bid, called the opening bid. But first, you need to decide if your hand is worth an opening bid.

Knowing when to get your feet wet

Two factors contribute to whether you have an opening bid: Suppose that you deal yourself either of the hands you see here: 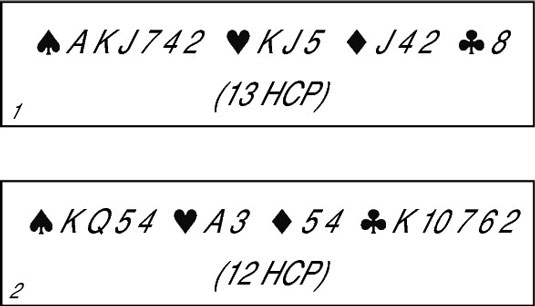 You can open the bidding with either of these hands; both hands contain at least 12 HCP, and each has a suit with four or more cards. So life is easy: You open the bidding in your long suit, 1♠ and 1♣, respectively.

The player who makes the opening bid eventually tries to show both strength and distribution to their partner. For example, if a player makes an opening bid of 1♦, you know that they have at least 12 HCP in their hand and figure to have four or more diamonds.

Understanding when to bend the rules

In general, you need at least 12 HCP to make an opening bid. But not all bridge concepts are cut and dried. As a case in point, the strength requirements for an opening bid can sometimes be shaded a little. For example, if you have a six-card suit or two five-card suits, you can open the bidding with as few as 11 HCP. If your partner complains about you opening with fewer than 12 HCP, just tell your partner that you don’t need as many points because you play so well.

Having the option of passing

The dealer has the first chance to make a bid. If they have sufficient strength, they open the bidding. They can also choose to pass (“pass” isn’t a bid).

When it’s your turn to bid (you may be first if you’re the dealer, or you may get a chance to make the opening bid if the players before you pass), if your hand doesn’t have enough strength to open, just say one word, “Pass,” and don’t look glum. Even if you aren’t strong enough to open the bidding, you can still join in later.

Remembering your goal: The eight-card fit

The first few bids in most bidding sequences are exploratory, like two fighters feeling each other out in the early rounds. Usually on the second bid, called the rebid, one of the players comes clean and shows their strength within a few points. Good news: then their partner can add the total HCP between the two hands to get a feel of how high to bid.

While all this telling and adding is going on, the partnership is trying to locate a suit that both players like (one in which they have at least eight cards between the two hands, also known as an eight-card fit):

When you open the bidding in a suit, your partner can’t possibly know exactly how many cards you have in the suit. The opening bid is just the beginning of your picture. After you make your rebid and, perhaps, a third bid, the picture of your hand starts to come into focus. Even the greatest of paintings begins with a single stroke of the brush.