How to Identify Extra Winners in Bridge

When you play a bridge hand at a trump contract, you count losers and extra winners. An extra winner is a winning trick in the dummy (North), upon which you can discard a loser from your own hand (South).

You can get rid of some of your losers by using extra winners. Extra winners come into play only after you (South) are void in the suit being played. Therefore, extra winners can exist only in a suit that’s unevenly divided between the two hands (and the greater length must be in the dummy). The stronger the extra winner suit (that is, the more high cards it has), the better.

Yes, you can have extra winners in your own hand, on which you can discard a loser (or losers) from the dummy. But actually gaining an extra trick from this process is rare.

This image shows you two extra winners in their natural habitat. 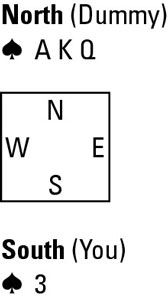 By contrast, the cards in this image look hopeful, but unfortunately, they can’t offer you any extra winners. 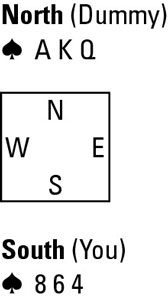 The cards in this image contain no extra winners, either. 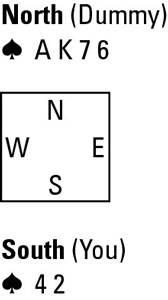 The dummy’s ♠AK take care of your two losing spades, but you have nothing “extra” over there — no ♠Q, for example — upon which you can discard one of your losers. This spade suit has no losers and no extra winners. You need to have “extra” winners to be able to throw a loser away. Your ♠A and ♠K do an excellent job of covering your two spade losers, but no more. You can’t squeeze blood out of a turnip.