How to Finesse with the King and Queen in Bridge

Sometimes, the honor cards that you hold in a hand of bridge dictate that you lead from weakness toward strength twice, such as when you have both the king and queen in a suit. The only thing better than taking one finesse in a suit is taking two finesses in the same suit. Just remember to lead from weakness toward strength, and watch yourself slide right by your opponents’ honor cards. 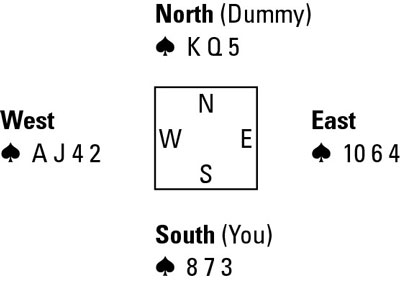 In this image, you have an item going on in the dummy between the ♠K and the ♠Q. Bridge nuts try to clean everything up, so some call this coupling a marriage, which is actually a pinochle term.

Forgetting the social aspects of the suit, you need to take as many spade tricks as you can. Start by leading a low spade, the ♠3, from your hand, from weakness to strength. West can make your life easy or hard:

You took a trick with the ♠Q by leading toward it, and you must repeat the process if you want to take a trick with the ♠K. Return to your hand (South) in another suit and lead another low spade, the ♠7. Depending on how West plays, you get a trick now or later:

You prevail because West, second to play, has the missing honor. You wouldn’t be so lucky if East had the SA.