How to Finesse for Extra Winners in Bridge

If you have a hand in which you can create extra winners in a suit by taking a finesse, lead from weakness to strength, usually a low card from your hand with the intention of playing an honor card from the dummy. But keep in mind that luck plays a role when taking a finesse. Because you don’t know who has the missing honor(s), finesses work about half the time. Shed no tears if your finesse doesn’t pan out. If the suit you’re finessing has enough honor cards between the two hands, even if the finesse loses, you can still create at least one extra winner.

In this image, you have the makings of an extra winner in spades because the dummy holds more cards than you, not to mention three honor cards: 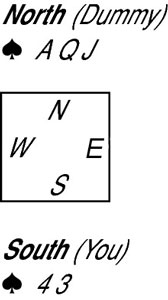 On the other hand, in the cards in this image, your honor strength isn’t strong enough to create any extra winners. When you have only two honors in the dummy and no honors in your hand, it helps if the two honors are equals, such as the queen and the jack or the king and the queen. Because that’s not the case here, this isn’t such a hot suit to attack early on. True, if the finesse wins, you have no loser, but no extra winner either. And if the finesse loses (if East has the ♠K), you lose one trick, and you have no extra winner to show for it. 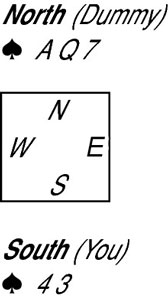